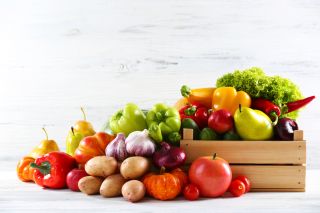 The findings suggest that "dietary pesticide exposure … may be associated with adverse reproductive consequences," the researchers from the Harvard T.H. Chan School of Public Health wrote in the Oct. 30 issue of the journal JAMA Internal Medicine.

However, because the study is one of the first to show such a link, more research is needed to confirm the results, they said. [9 Disgusting Things That the FDA Allows in Your Food]

Previous studies in animals have found that ingestion of pesticide mixtures at levels thought to be safe was linked to a decrease in the number of offspring that the animals had, according to the study. But it wasn't clear if the same was true for people.

In the new study, the researchers analyzed data from 325 women who underwent treatment for infertility using assisted reproductive technology, such as in vitro fertilization (IVF). Before the women started their treatment, they completed a survey about their diet, including how often they ate certain foods.

Then, the researchers used a government database containing information on typical pesticide levels found on different types of fruits and vegetables to estimate the women's exposure to pesticides. The database showed that some fruits and vegetables, such as peppers, raw spinach and strawberries, tend to have relatively high levels of pesticide residue, and other types, such as peas, dried plums and onions, tend to have relatively low levels.

The findings held, even after the researchers took into account factors that could affect reproductive health, such as age, body mass index (BMI) and smoking habits, and whether the women said they ate organic fruits and vegetables, which tend to have lower levels of pesticide residues.

Still, the researchers noted that the study only found an association between pesticide exposure and worse reproductive outcomes, and it cannot prove a "cause and effect" relationship. The study did not directly test fruits and vegetables for pesticides, but rather, estimated the level of pesticides using a database; and it's possible that these estimates were not always accurate, the researchers said. In addition, because the women in the study were seeking treatment for infertility, it's not clear if the results apply to the general population.

As one way to reduce exposure to pesticides and other environmental chemicals, the American Congress of Obstetricians and Gynecologists recommends that women who are pregnant or trying to conceive carefully wash fresh fruits and vegetables before eating them.