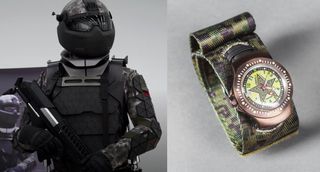 A high-tech, Russian "soldier of the future" combat suit just got a gear upgrade, with a wristwatch capable of withstanding nuclear blasts.

Newly added to the "Ratnik" military kit — a complex multi-system array of wearable and portable combat gear — the mechanical, self-winding watch weighs about 4 ounces (100 grams) and can withstand destructive electronic pulses used in warfare "and even consequences of a nuclear blast," representatives of the Rostek State Corporation, developers of the Ratnik kit, said in a statement.

"If a soldier is exposed to electromagnetic emission of a nuclear bomb, the watch will continue to operate without any interruption," according to Oleg Faustov, a chief designer of life support systems for tactical gear at Rostek. The statement did not describe any other gear in the Ratnik kit as impervious to the effects of a nuclear explosion, however. [The 20 Weirdest Military Weapons]

Five integrated systems incorporating 59 items — including weapons and devices for protection, communication and optical enhancement — make up the Ratnik combat kit, which can operate under any type of weather conditions and may be used around the clock, the Russian news agency TASS reported.

A more advanced version of the combat gear, described as Ratnik-3, is expected to be unveiled in 2020 and will include a sophisticated suite of operating networks built into a titanium frame, Rostek representatives said on Sept. 29. This so-called "combat suit of the future" will be about 30 percent lighter than the current Ratnik kit, and it will incorporate a jointed exoskeleton with devices for controlling the suit's microclimate and monitoring the wearer's health, along with a digital display system for a helmet face shield or goggles, according to TASS.

The wristwatch may currently be the only device in the Ratnik kit built to emerge intact after a nuclear blast, but the looming threat of nuclear weapons has certainly been gathering more attention on the global stage in recent months.

In January, a consortium of scientists and experts in charge of the "Doomsday Clock," a fictional timepiece counting down the minutes to humanity's destruction, moved its hands 30 seconds closer to midnight — absolute destruction — in part to reflect growing concerns about the threat of nuclear war.

More recently, missile tests in North Korea rekindled fears around the world about the possibility of their using long-range nuclear weapons. President Donald Trump has further stoked fears with promises to increase the U.S. nuclear arsenal "nearly tenfold," a plan that surprised many of his closest advisors, NBC reported Oct. 11.