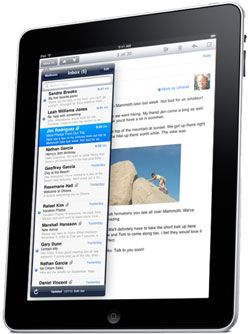 Apple's new iPad device is so sleek and seemingly simple to use that one could easily imagine using it for hours on end, but doing so might not be so great for your body, experts say.

These lightweight, mobile computers give users unfettered access to the Internet anytime and from anywhere, but many of them suffer from an inherent design flaw, namely the "co-location" of the keyboard and monitor, said Anthony Andre, founder of Interface Analysis Associates (IAA) and a professor of Human Factors at San Jose State University.

"You are taking two things that belong in different locations and merging them together," Andre told TechNewsDaily.

The posture many of us assume when working on a laptop or other mobile device can put a strain on our bodies. Andre calls this position – which typically involves sitting hunched over, with rounded shoulders, laptop on lap, and arms held close to the body – the "airport posture."

"The thinner and more mobile the device, the worse it is, because you end up in more situations where you normally wouldn't even use a laptop," Andre said. "The negative side to mobility and the thin tablet approach is you end up in more places with it and you take it out more often than you maybe would a laptop."

The iPad includes a bigger version of the virtual keyboard used in Apple's iPhone, but typing on the iPad's glass display might not prove as comfortable as on the iPhone.

"With the phone, you can bring it up to your face, but [with the iPad] you have to put it on your lap if you're going to do some serious two-handed typing," Andre said.

"But once you do that, you have this little flat disk on your lap and you're talking about the opposite of where computer work stations have come with their articulating keyboard trays that try to put you in a good posture," he said.

Apple does sell keyboards that work with the iPad, as well as a cover for the tablet computer that can double as a stand to prop it up at an angle.

But the majority of people who use the iPad won't use these accessories most of the time, Andre said.

"A few people will take advantage of the keyboard … but that only works if you're using it at your desktop and that just makes it a deficient desktop [computer]," he said.

Neck and back problems

David Rempel, a doctor at the University of California, San Francisco who sees plenty of laptop-related pain in his consulting work, also worries about the iPad's ergonomics.

While the iPad "creates a wonderful opportunity in terms of mobility and ease of interaction, … [it] poses a similar type of musculoskeletal problems as the laptop," Rempel said in a telephone interview.

Working on a laptop for long periods of time puts a heavy load on a user's neck and upper back, causing fatigue and pain, according to Rempel.

Large U.S.-based companies that shifted their workforce away from desktops to laptops to increase productivity  found their workers suffered from more neck and back problems, Rempel said.

If you have to go mobile, here are a few suggestions for minimizing the burden on your body:

Additional reporting for this story was contributed by Ker Than.