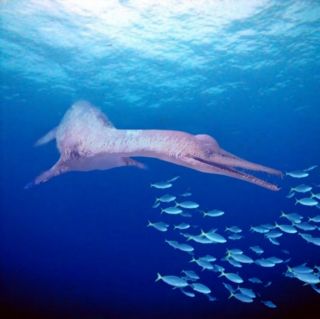 An artist's interpretation of a swimming Plesiosaur.
(Image: © Kenneth Carpenter)

A pair of Vermont men, Dick Affolter and his 34-year-old stepson, Pete Bodette, had made the digital recordings the previous summer while salmon fishing. ABC consulted two retired FBI forensic image analysts, who concluded that the video appeared authentic, although they could not say what it depicted.

The incident added to a long list of Champ sightings, which have described a chameleonesque creature that is black, gray, brown, moss green, reddish bronze or other colors, and is between 10 and 187 feet long, with multiple humps or coils as well as horns or a mane or glowing eyes or “jaws like an alligator”—or none of those features.

Such sightings may be due to large fish like sturgeon, schools of fish, and other marine creatures. For example, otters, swimming in a line, can mimic a single long, serpentine creature moving in an undulating fashion. Other Champ suspects include wind slicks, boat wakes, driftwood, long-necked birds, and many other possibilities. A contributing factor is “expectant attention,” the tendency of people who, expecting to see something, are misled by anything resembling it.

Although many people believe that Lake Champlain may host a dinosaur-era creature, that is unlikely in the extreme since is the lake was formed only some 10,000 years ago.

Furthemore, a single creature could not live for centuries, nor could it reproduce itself, so there would have to be a breeding population for the species to have continued to the present. And—if there were indeed multiple plesiosaurs, zeuglodons, or other leviathans—over time a beached carcass or other certain trace of one would surely present itself.

Nevertheless, the two fishermen insisted they had seen something strange. Bodette stated that the creature was “as big around as my thigh.” Affolter admitted neither of them ever saw the entire body, although they estimated the length at 10 to 15 feet. In a report on the video, the Burlington Free Press observed (Aug. 18, 2005), “In one frame it almost looks as if the head of an alligator-like animal breaks the surface. . . .”

The newspaper noted that the Champ legend dated from 1609 when French explorer Samuel de Champlain described a creature the Native Americans called Chaousarou. In his journal, Champlain wrote that the species was reputed to range up to 10 feet long and that he had personally seen some half that length and “as big as my thigh”—words subsequently echoed by eyewitness Bodette. Champlain noted that Chaousarou resembled a pike with an exceedingly long snout and “dangerous teeth”—certainly alligator-like features. In short, Champlain’s description seemingly tallies with the creature the Vermont fishermen encountered.

The apparent match is instructive: the explorer was almost certainly describing a longnose gar, one of the Ganoidei subclass, which includes sturgeons and other varieties.

Although the video is insufficient for a positive identification, the men’s description does permit this tentative solution to the mystery. For four centuries gar have been astonishing people on Lake Champlain. During one of my investigative trips to the lake I interviewed a fisherman who had just  witnessed a friend hook a longnose gar that—he insisted—was “monster” sized, measuring about 6 feet 4 inches long. He called this “the real Champ,” and dubbed it, appropriately, “Gar-gantua.”

Joe Nickell, Ph.D., a former stage magician, private detective and teacher of literature, is now a paranormal investigator and co-author of the book "Lake Monster Mysteries," to be published in May. This article appears on LiveScience courtesy of Skeptical Inquirer magazine.

The sightings could be explained by several otters, such as this one, swimming together...

... Or maybe people are seeing a longnose gar.