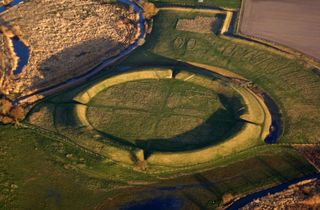 Archaeologists are uncovering the mysteries of a Viking-age fortress at Borgring, on the island of Zealand in eastern Denmark, which is thought to have been built late in the 10th century by the Danish king Harald Bluetooth.
(Image: © Peter Jensen/Aarhus University)

The discovery of a Viking-age fortress in Denmark has shed new light on a network of military sites built by the 10th-century Danish king Harald Bluetooth, according to archaeologists.

Bluetooth — for whom the eponymous digital network technology is named — is credited with building several large, circular fortresses, or "ring forts," around Denmark in the 970s and 980s, as he unified the unruly Viking clans of the region into a centralized kingdom.

Until a few years ago, the sites of four such ring forts were known, and in the decades since they were found, debate has raged among Danish historians about these structures' purpose. [See More Photos of the Viking-Age Fortress in Denmark]

While some historians argued that the ring forts were genuine military fortifications, others proposed that they were built mainly as regional symbols of Bluetooth's prestige and political power.

But in 2014, a fifth Bluetooth ring fort was discovered — the first to be found in 60 years — and the circumstances of the find seem to settle the historical argument about their function, said Søren Sindbæk, an archaeologist at Aarhus University in Denmark.

"These are perhaps the rarest and strangest monuments that the Vikings have left us," Sindbæk told Live Science. "It has been so long since we found a new one and had the opportunity to excavate one with all the new methods."

The location of the latest fort to be discovered, at Borgring on the island of Zealand in eastern Denmark, showed that there was a military basis to Bluetooth's network of ring forts, Sindbæk said.

"It wasn't just a random collection of monuments that were placed there to display power, but there was a coherent military logic to them," he said. "They were placed at sites that were particularly vulnerable [to attack], and yet they were able to dominate the landscape."

Sindbæk explained that he started researching the distribution of the Bluetooth ring forts around Denmark several years ago, looking for any common features in their locations.

He found that each of the known ring forts was built near major Viking-age land routes, and that each ring fort was accessible by sea but sufficiently far from the coast to be well protected from seaborne attacks.

"If you went by the same criteria, there were just a couple of places in Denmark that we could add," Sindbæk said. "So we went out to survey those, and at one of those spots, we hit what we were looking for."

The discovery of the ring fort at Borgring showed that these structures were deliberately located to defend Bluetooth's new kingdom against foreign invaders, he said.

"It confirmed to us that we did understand the plan behind the network of fortresses, that we understood it well enough to identify yet another ring-fort site," Sindbæk said.

The structures were also located at strategic spots to potentially defend against military attacks, according to the archaeologists. [Fierce Fighters: 7 Secrets of Viking Seamen]

"They were close to the points in the landscape where an army could have landed by sea, which is the most obvious place for a Viking-age army to come from, and from where they could have taken control," Sindbæk said. "And these ring forts were placed exactly where you would need to be in order to prevent that."

After Sindbæk and his research colleagues identified the likely site of the fortress beneath farmland at Borgring, they used data from an aerial lidar survey published by the Danish government to confirm its distinctive ring shape, which wasn't apparent at first, Sindbaek said. (Lidar is an extremely accurate method of surveying land or measuring the distance to objects, based on the timings of reflections of pulses of laser light.)

"The lidar data made it very obvious why we were missing the real shape of the feature in the landscape," he said. "What was left in some parts of the fortress was literally just a change in the level of the ground of perhaps 30 to 40 centimeters [12 to 16 inches], so it's nothing that you would see on the ground."

The lidar discovery was followed by a geophysical survey of the underground fortress, led by geophysicist Helen Goodchild of the University of York.

Goodchild surveyed the Borgring site using a method called fluxgate gradiometry, which can detect subtle traces in underground magnetic fields caused by ancient bacterial processes, such as the rotting of wood.

The results of the geophysical survey, which were published online Aug. 8in the journal Antiquity, clearly showed the ring-shaped fortress ramparts, 470 feet (144 meters) in diameter, as well as the locations of four gatehouses at each of the cardinal compass points around the ring, Goodchild told Live Science.

"The geophysics results were pretty impressive," Goodchild said. "They essentially showed quite a lot of the layout of the rampart structure, which meant [archaeologists] could target their excavations very precisely."

Archaeologists carried out excavations at the Borgring site over the past two summers.

In 2016, the researchers excavated the eastern gatehouse of the fortress, which appeared to have been used as a workshop sometime after the fortress ceased to be used by the military, probably in the 11th century, said Jonas Christensen, an archaeologist at the Danish Castle Center in Vordingborg.

In the gatehouse, the researchers found a Viking toolbox that included several woodworking and metalworkingtools, and pieces of glazed pottery usually associated with wealthy or high-status Viking sites in Denmark and Sweden, Christensen told Live Science.

He said the excavations at Borgring this year also uncovered a plank of ancient oak, shaped and drilled with several holes, which had been used for dendrochronological dating, which is based on distinctive patterns of tree growth rings within the wood.

That dating showed that the plank was cut at the same time as wood dated from other ring-fort sites in Denmark that were known to have been built in the 970s or 980s, he said.

"The way the dates fit on the curve is exactly the same," Christensen said. "That means the plank was cut and shaped at the same time, and it means [the fort] was built by Harald Bluetooth — so that's the best date we have yet."