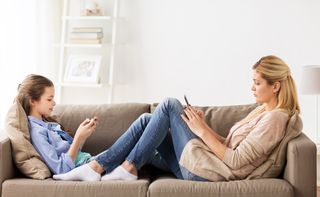 How does technology affect your relationships?
(Image: © Syda Productions/Shutterstock)

As a university professor and a mother of teen boys, I am immersed in a world of young faces buried in their phones. To be fair, adults, too, are enamored with the tiny, powerful computing devices in the palms of their hands. The patterns of daily life have been forever altered by the ubiquity of digital devices. The world has been rewired. And nobody wrote a user's manual.

Advances in digital media and mobile devices, and the rising power of social media, are changing the way people engage not only with the world but also with close friends and family. This generation of parents faces rapidly emerging and unprecedented challenges in managing digital devices and the activities they enable – and must simultaneously wrestle with these issues in their own lives and in the lives of their children.

I recently led a research project investigating the effects of digital devices on family life in Japan. As part of that work, we compared our results from Japan to studies asking similar questions of U.S. families, conducted by our collaborator Common Sense Media, a nonprofit organization focusing on children and technology. We found Japanese and U.S. families struggling in very similar ways with the impact of technology on their lives, their relationships and each other.

Parents and teens in both societies use online media for long periods every day, which at times causes family stress and arguments. Some feel addicted to their devices, and many worry about family members' apparent addictions to technology. And in both countries, there are children who feel their parents neglect them in favor of digital devices.

We polled 1,200 Japanese parents and teens to find out how the saturation of cellphones and other devices in family life is playing out in homes and child-parent relationships. We compared their answers to Common Sense's existing research on U.S. teens and parents.

The findings are clear: Parents and teens in the high-tech societies of Japan and the U.S. find it hard to imagine life without mobile phones and tablets. And they share similar struggles with the role of technology in their lives: In both countries, the "always-on" media environment leads a great many teens and parents to feel the need to check their devices frequently, often several times an hour.

And large numbers of parents and teens feel the need to "respond immediately" to texts, social networking messages and notifications.

We also took a closer look at how parents and teens perceive their own, and each other's dependency on mobile phones. In both the U.S. and Japan, the answers were surprisingly consistent: Roughly half of teens reported feeling "addicted" to their mobile devices, and so did more than a quarter of parents.

Many parents and teens surveyed in both countries feel that the always-available mobile devices have interfered with their family connections. More than half of parents in both the U.S. and Japan think their teens spend too much time on their mobile devices. More than half of American teens think the same about their parents, though far fewer Japanese teens share that view.

Both parents and teens often feel the other is frequently distracted and not able to be fully present when they're spending time together.

These conflicts play out in frequent disagreements – roughly one-third of U.S. parents and teens argue about device use every day. The numbers are lower in Japan, but families there are having the same fight.

And some parents and teens in both countries say mobile device use has hurt the relationship between parents and children. In particular, one in four Japanese parents expressed concern about the damaging effects of digital device use.

Teenagers voiced concerns of their own. In both countries, teens watch their parents engage with their own devices and it's not always a comfortable experience: 6 percent of U.S. teens, and more than three times as many Japanese teens, say they have sometimes felt that a parent thinks their mobile device is more important than their child.

While these results highlight the ways in which mobile devices have become a source of tension in family life, they also reveal a common belief that using them prepares teens for jobs in the 21st century. It's not just teens who see the benefits of digital device use: 25 percent of Japanese and 88 percent of U.S. parents feel it helps their children acquire new skills.

This study focused on patterns of use and exposure to digital media, but leads to further questions about what content families engage with and their reasons for using media. For instance, what do people mean when they use the term "addicted" in reference to mobile technology? What drives people's need for digital connection? How might social and cultural differences alter the effects of digital devices on family life? And, of course, expanding these questions beyond just two countries will help inform a global conversation about how families can integrate technology into their lives in thoughtful and productive ways.