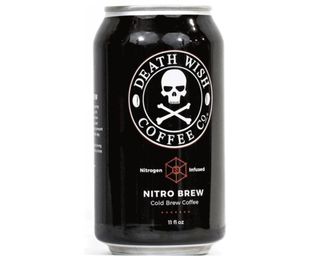 A company that claims to make one of the strongest coffees in the world is recalling some of its products because they could pose a risk of serious illness.

On Tuesday (Sept. 19), Death Wish Coffee Co., which brands itself as the "world's strongest coffee," said it was recalling all of its 11-ounce Nitro Cold Brew cans because the products could pose a risk of botulism, a serious and sometimes deadly illness caused by the botulin toxin. The company said it had determined that its current manufacturing process for the cans could lead to the growth of the bacteria that produce the botulin toxin, which can occur in low-oxygen and low-acid foods.

"Our customers' safety is of paramount importance and Death Wish Coffee is taking this significant, proactive step to ensure that the highest quality, safest and, of course, strongest coffee products we produce are of industry-exceeding standards," Mike Brown, the founder and owner of Death Wish Coffee, said in a statement. "We apologize for the inconvenience this may cause our customers and our retail partners, but we believe this is the right precautionary measure to take."

So far, no illnesses have been reported in connection with the recalled products.

Death Wish coffee contains more than 700 milligrams of caffeine per 12 fluid ounces, according to the company. That's nearly twice the recommended daily limit of caffeine, which is 400 mg. Its Cold Brew product contains less caffeine, about 380 mg per can. For comparison, a 12-ounce cup of dark roast coffee at Starbucks has about 200 mg of caffeine. [10 Interesting Facts About Caffeine]

The company, which is based in Round Lake, New York, said it was halting production of its Cold Brew cans until an extra step is added to their manufacturing process to address the botulism risk.

Death Wish Coffee has pulled its cans from store shelves and removed them from its website. In addition, customers who purchased the cans through the Death Wish website will receive a full refund within 60 days, the statement said.