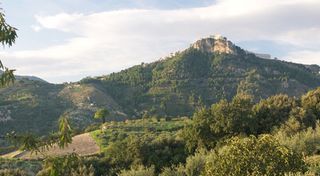 The ancient pottery was discovered in a cave of Monte Kronio in Agrigento, Italy.
(Image: © Davide Tanasi/University of South Florida)

The oldest traces of Italian wine have been discovered in a cave in Sicily, researchers announced.

Wine residues were found on a large ceramic jar that was stored nearly 6,000 years ago in the caverns of a cult site known as Monte Kronio.

For the study in Sicily, researchers looked for residues on large ceramic storage jars located at Monte Kronio and another prehistoric archaeological site, Sant'Ippolito hill. Monte Kronio, a limestone hill that juts out near Sicily's southwest coast, is famous for its network of hydrothermal caves. Because of steam rising from underground volcanic activity, the galleries are hot and extremely humid, with the air temperature hovering around 100 degrees Fahrenheit (38 degrees Celsius). People have flocked to the caves for their curative, spa-like effects since the Neolithic era.

"In prehistory, the cave was used as a cult place," study leader Davide Tanasi, an archaeologist at the University of South Florida, told Live Science, adding that a jar of wine could have been placed inside as an offering.

Tanasi and his Italian colleagues detected one of the main acids in wine, tartaric acid, and its sodium salt in a pottery sample from Monte Kronio.

"The archaeological implications of this new data are enormous, especially considering that the identification of wine [is] the first and earliest-attested presence of such product in an archaeological context in Sicily," Tanasi and colleagues wrote in the study, published online Aug. 12 in the Microchemical Journal. Wine production in Italy was previously thought to have developed about 2,000 years later, during the Bronze Age, the researchers said.

Though the discovery might be the oldest trace of wine in Italy, it's not the oldest in the world. Researchers think wine-making got its start in the Near East around 9,000 years ago. Wine residue has been found on 7,000-year-old pottery from Hajji Firuz Tepe, a Neolithic village in Iran. Archaeologists have also found 6,100-year-old wine-making equipment along with withered grape vines and seeds in a cave in Armenia.