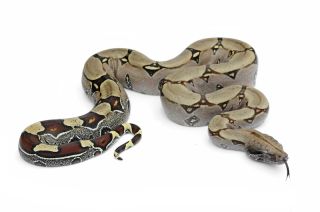 Firefighters in Ohio were forced to decapitate a pet boa constrictor last week that had latched its teeth onto a woman's nose and wound its serpentine body around her neck, according to news sources. The woman survived, but the incident raises the question: Do boas typically attack the faces and necks of people?

The answer is no, largely because the Boa constrictor is usually found slithering on the ground, far from the faces and necks of people, said Scott Boback, an associate professor of biology at Dickinson College in Pennsylvania, who was not involved with the woman's case.

"It's not typical for [boa constrictors] to, one, strike someone in the face and, two, to wrap around their neck," Boback told Live Science. "If that animal bit her in the nose, I really think that her face was too close to the animal. That's the error that was made." [7 Shocking Snake Stories]

In the incident ,which occurred on July 27, the woman couldn't pry the 5.5-foot-long (1.6 meters) snake off, so she called 911 at 2 p.m. local time. She told emergency workers that she had taken on two boa constrictors as "rescue snakes" the day before and had 11 snakes total in her home, according to audio of the emergency call.

"Please hurry — it's on my nose," said the woman, who wasn't named. "There's blood everywhere."

Firefighters found the woman lying on her driveway. Boa constrictors are not venomous, but "it was wrapped around her neck and biting her nose and wouldn't let go," Sheffield Lake Fire Chief Tim Card told the Elyria Chronicle-Telegram. "They had to cut its head off with a knife to get it to let go of her face."

It's unclear what the woman was doing when the snake bit her, but snakes can bite people in the face if they're close enough, Boback said. For instance, if a person has a snake wound around his or her shoulders — a feat of braggadocio usually done to get pictures of the daring act — the snake can easily strike the person's face or the face of a nearby person, Boback said.

However, snakes must bite first and coil second, he noted. As a snake lunges forward to bite, it generates momentum that helps it glide into a constriction loop, bending its chin downward and going into a sort of somersault as it curls around the prey's body. [Image Gallery: Snakes of the World]

Boa strike and coil application from Scott Boback on Vimeo.

So, it's likely the snake bit the woman's face first and then coiled around her neck, Boback said.

He noted that there are ways to remove a snake other than decapitating it. Snakes' teeth are curved and backward-pointing. "It's designed not to fall off of the prey, "Boback said. "It's hooked back like a fish hook."

That means "to remove that from her nose, you actually have to move the head of the snake forward," Boback said.

Sliding a credit card under the snakes' teeth can help detach it, Boback said. "You can push a credit card from the snout to the back of its mouth to help dislodge the teeth," he said.

Another strategy involves submerging the snake's head in water, though this works only if the snake has bitten a part of the body that can also be submerged, such as a hand or foot, Boback said. If the snake can't breathe, it will release the prey and surface for air, he said.

Boback added that it's best to avoid handling snakes when they're digesting meals or molting, as they're more likely to strike at those times, because they're feeling irritable or vulnerable. While many boa constrictors have found their way into terrariums, the snakes are originally from the region spanning from Mexico to Argentina. They're not endangered, but could soon become vulnerable because of the relentless animal pet trade, Boback said.