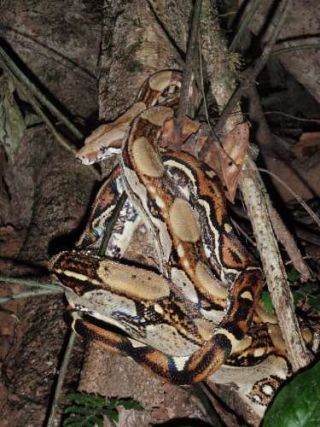 Boa constrictor "in situ" on a tree buttress right after some rain in Puerto Rico.
(Image: © Robert Reed , USGS )

Scientists are urging swift action to stop the spread of boa constrictors in Puerto Rico now that new research shows the invasive species has established a breeding population on the island.

"We've learned from dealing with other invasive snakes that understanding the source of these populations and preventing spread as soon as possible is important to protect ecosystems," Bob Reed, a scientist with the U.S. Geological Survey (USGS) who was involved in the new study, said in a statement. "Once non-native snakes become established across a large area, especially in densely forested areas, they become much more difficult to find and almost impossible to eradicate."

The thick-bodied snakes, native to parts of Central and South America, can grow up to 10 feet (3 meters) long, weighing up to 75 pounds (34 kilograms); they have no natural predators in Puerto Rico to keep their numbers in check. The population represents the first breeding group of boa constrictors found in the United States outside of south Florida, where these snakes, as well as pythons, have become a serious problem.

Individual boas in Puerto Rico are closely related, the genetic study found, indicating the invasive population likely grew out of a small group of snakes, which were likely unleashed accidentally in connection with the exotic pet trade.

Most boas recovered from the island in the past were strays or illegal pets. But researchers say that in the last year, 150 boas have been removed from the wild in an expanding area of Mayagüez, a municipality in western Puerto Rico. What's more, strays found in the northern part of the island are closely related to the Mayagüez population, the study found, suggesting that the boas are inadvertently being moved long distances — for example, along roads in trucks shipping agricultural goods. This finding highlights how rapidly an invasive species can colonize and island ecosystem.

The new research was detailed online Nov. 29 in the journal Biological Invasions.