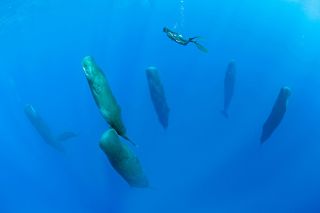 Sleeping dogs lie, but sleeping whales … "stand" on their tails? That was the scene recently glimpsed by a diver in the Caribbean, at least, when the photographer encountered a group of sperm whales napping together, all of them suspended tails-down in the water.

Photographer Franco Banfi was free diving — underwater diving without a breathing apparatus — on Jan. 28 off the coast of Dominica, an island in the Caribbean Sea between Martinique and Guadalupe, when he spied six still and silent sperm whales drifting in their upright postures at a depth of around 65 feet (20 meters).

Researchers first saw this unusual sleep behavior in sperm whales in 2008, describing it in a study published in January of that year in the journal Current Biology. The scientists in that study found that sperm whales dozed in this upright drifting posture for about 10 to 15 minutes at a time, and the whales did not breathe or move at all during their naps, the study authors reported. [Sleep Tight! Snoozing Animals Gallery]

Banfi, who has won several international awards for his underwater photography, began documenting life underwater in the early 1980s, just a few months after he started diving, Canon Europe reported in April.

Capturing images of whales can be especially challenging, because the animals are so big that they are difficult to illuminate with strobe lights, which underwater photographers frequently use in dark ocean depths, Banfi told Canon Europe.

"You have to use natural light," he said. "You have to look at where the sun is coming from and have the animal lit from the sun."

And if a photographer isn't in the right position to capture an elusive underwater moment, the subject may not stick around long enough to provide a second chance, Banfi added.

Toothed whales and dolphins in captivity exhibit very different sleeping behaviors from those of the napping sperm whales; captive cetaceans have been observed sleeping with one hemisphere of their brains still active, so that they can swim and breathe voluntarily while at rest, the 2008 study authors wrote.

Those scientists discovered the sleepers in the wild when their boat accidentally drifted into the pod of six whales bobbing just below the surface in waters off the coast of Chile. The animals were inactive and unresponsive, even when the scientists approached them in a boat, but all the whales awakened quickly and swam away when the boat brushed against one of them and woke it up, the study authors reported.

Further observations revealed that the sperm whales entered these sleeping states by first descending head-down to a depth several times that of their bodies, then passively turning head-up and drifting closer to the surface. The findings showed that sperm whales around the world practice this vertical sleeping posture — but infrequently, spending only about 7 percent of their time asleep, which is less than any other mammal spends, according to the study.

Those scientists collected their data from the ocean surface. Banfi, on the other hand, captured this and other images of sperm whales by free-diving to depths of 49 feet (15 meters) and staying underwater as long as 1 minute to photograph the whales, he told Canon Europe.

"For this kind of picture, you come up and maybe you breathe three times and then you have to go down again because you want to take more pictures," Banfi explained. "You cannot stay long on the surface, because the situation will change.”