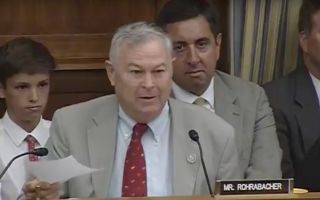 Dana Rohrabacher (R-California) asks questions of planetary scientists on July 18, 2017, during a hearing of the U.S. House of Representatives' Committee on Science, Space and Technology's Space Subcommittee.
(Image: © U.S. House of Representatives/Space Subcommittee of Science, Space and Technology Committee)

In case you were wondering, there's no evidence that Mars hosted an alien civilization thousands of years ago.

Nonetheless, Rep. Dana Rohrabacher, R-Calif., asked a panel of planetary scientists to speculate about this possibility today (July 18), during a hearing of the U.S. House of Representatives' Committee on Science, Space and Technology's Space Subcommittee.

The inquiry followed testimony by panelist Ken Farley, the project scientist for NASA's Mars 2020 rover mission, stating that the Red Planet had lakes and rivers, and perhaps even a huge northern ocean, until about 3.6 billion years ago. So it fell to Farley to answer the question of whether Mars was perhaps once home to intelligent aliens. [13 Ways to Hunt Intelligent Aliens]

"Would you rule that out?"' Rohrabacher interjected.

"I would say that is extremely unlikely," Farley responded.

The belief that intelligent aliens may call Mars home has a rich and eventful history. For example, more than a century ago, American astronomer Percival Lowell claimed to have spotted canals on Mars, which he hypothesized had been built to bring water from the planet's polar ice caps down to the midlatitudes.

And in 1976, photos by NASA's Viking 1 Mars orbiter showed a landform that bore a striking resemblance to a human face. Though clearer imagery by later spacecraft revealed the "Face on Mars" to be an ordinary rock formation, some people still claim that it's evidence of an ancient civilization.

Many orbiters, landers and rovers have explored Mars over the decades, and none have detected any evidence that intelligent organisms ever arose there. But that doesn't necessarily mean the Red Planet has never supported life of any kind.

As Farley noted, observations by NASA's Curiosity rover and a number of other spacecraft suggest that at least some parts of the Red Planet were habitable for long stretches in the distant past. So ancient Mars may have hosted microbial life, many scientists say; indeed, some researchers think microbes may survive there today, buried deep in the soil, where they're protected from the high radiation fluxes on the surface. (Among this latter group is Gil Levin, the leader of the labeled-release experiment on the Viking Mars landers. He still believes this experiment found solid evidence of microbial metabolism in the Martian soil, though most other researchers view the results as equivocal.)

The 2020 Mars rover will search for evidence of past (not current) microbial life when it arrives at the Red Planet in February 2021. The six-wheeled robot, which is based heavily on Curiosity's design, will also collect and store samples for possible future return to Earth.

"Truly definitive discovery of microbial biosignatures by instruments on board the rover is unlikely, and can best be undertaken by using the full arsenal of terrestrial laboratories," Farley testified at the hearing today, explaining the rationale behind the sample-caching strategy. (NASA officials have said they aim to get these samples back to Earth someday, but at present, there is no concrete plan for doing so.)

Today's hearing was a general discussion of NASA's upcoming planetary-science missions, with a focus on the 2020 rover and Europa Clipper. This latter mission will launch in the 2020s to investigate the life-hosting potential of the Jupiter moon Europa, which harbors a vast ocean of liquid water beneath its icy shell.

The Europa Clipper and the 2020 rover are "flagships" — ambitious missions whose price tags top the $1 billion mark. Also discussed at the hearing was NASA's lower-cost Psyche mission, which will launch in 2022 to study the bizarre metal asteroid Psyche up close.

Pappalardo revealed an interesting nugget about the Europa Clipper science team, in response to questioning by Space Subcommittee member Rep. Ed Perlmutter, D-Colo. Perlmutter said that, to him, the Clipper mission evokes the famous sci-fi film "2001: A Space Odyssey," which depicts a mission to the Jupiter system and prominently features a mysterious monolith.

"Our Europa science team of about 130 people — we have as our mascot, our totem, a giant monolith that we tote around to our meetings," Pappalardo responded, eliciting laughter in the hearing room. "Actually, we have three now."

You can watch the entire hearing here: https://www.youtube.com/watch?v=PLJ5QrR_zj8