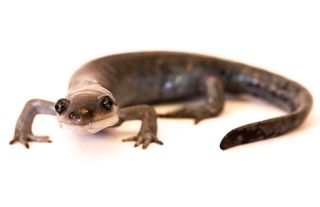 The all-female salamander hybrid Ambystoma has found a simple formula for reproductive success: Mate with multiple males and hijack segments of each partner's genome to pass on to her offspring.
(Image: © Robert Denton/Ohio State University)

In the natural world, stealing is a necessary and frequent strategy for survival. Every animal group includes opportunists that snatch others' fresh kills, pilfer nesting materials or swipe prospective mates from distracted rivals.

But only one type of animal uses thievery at the genetic level for reproduction — an all-female lineage of salamanders in the Ambystoma genus, which contains dozens of species and is widespread across North America. These females mate with multiple males from other Ambystoma species and hijack copies of their partners' genomes, researchers discovered about a decade ago.

However, scientists recently found that the salamanders weren't just stealing the males' genomes. They're incorporating genetic material from males across multiple species into their own genetic code and using all of them at the same time — a process that is otherwise unheard of in animals, researchers reported in a new study. [Album: Bizarre Frogs, Lizards and Salamanders]

In most animals, sexual reproduction typically follows a few basic rules: Females produce eggs, a male's sperm fertilizes the egg and the genome of the offspring incorporates one set of chromosomes inherited from the mother and one from the father.

But something peculiar happened around 5 million to 6 million years ago when a pair of Ambystoma salamanders mated — a mutation emerged that produced a lineage of all-female salamanders, which persists to the present day, according to study lead author Maurine Neiman, an associate professor of evolutionary biology at the University of Iowa.

Among all the Ambystoma species, this lineage has defied easy classification. The females can mate successfully with several species of Ambystoma males; they use the males' sperm to fertilize their eggs — or to simply kick-start an egg's development — but they produce only daughters, apparently making offspring that are essentially copied from their own DNA, Neiman told Live Science.

From there, the story gets even weirder.

About 10 years ago, scientists discovered that this all-female lineage practices something so rare that they needed a new term to describe it — kleptogenesis, or "gene stealing." The females were looting genomes from male partners in multiple species, and stashing the DNA within their own cells to pass at least some of it along to their daughters, Neiman explained.

How exactly the salamanders were doing this — and how all those genes were behaving under these highly unusual conditions — remained a mystery, but it was recently brought to light in the new study, according to the lead author Kyle McElroy, a doctoral candidate in the Department of Biology at the University of Iowa.

"Until this paper, there were no attempts to look at gene expression or whole-genome use in these salamanders," McElroy told Live Science.

Brother, can you spare a genome?

Researchers from two labs — one at the University of Iowa and one at Ohio State University — examined a female salamander from the unisex lineage that had three "extra" genome copies, all stolen from three male species that it had mated with. They used a technique called RNA sequencing to look at 3,000 genes in the female, to see which of the genes across all the genomes were being expressed (or activated); 72 percent of the genes provided by all three partners were expressed equally, the study authors reported.

"Most of what's known about gene expression in polyploids [organisms with multiple genome copies] comes from plants — they shut off the extra genome and only one really gets used — the other degrades over time," McElroy explained.

"What's interesting about this species is that these genome combinations aren't fixed — they uptake new ones and drop other ones. This animal has genomes from three different species that are all somehow working and being expressed," he said.

While it is still unclear which traits these genes control and how the salamanders select which portions of the male genomes they keep and which they discard from generation to generation, these fascinating animals serve as an important example of the unexpected paths that evolution can take toward reproductive success, Neiman told Live Science.

"Biology is always weirder than you can imagine," she added.

The findings were published online April 1 in the journal Genome Biology and Evolution.