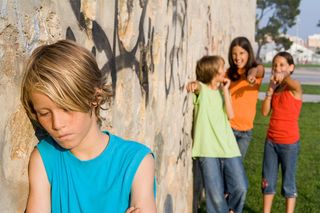 Bullying may leave long-lasting scars on kids' DNA in addition to their psyche, new research suggests.

A small study found that bullied kids are more likely to have changes in the expression of a gene involved in mood regulation compared with their identical twin siblings who were not bullied.

"Since they were identical twins living in the same conditions, changes in the chemical structure surrounding the gene cannot be explained by genetics or family environment," researcher Isabelle Ouellet-Morin said in a statement. "Our results suggest that victimization experiences are the source of these changes."

Ouellet-Morin, who is affiliated with King's College London and the Université de Montréal, and her team looked at 28 pairs of identical twins born between 1994 and 1995. Data had been collected on these children through the British Environmental Risk (E-Risk) Longitudinal Twin Study. In each of these 28 pairs, one twin had been a victim of bullying while the other had not.

Part of the survey included an analysis of the kids' DNA methylation of SERT, a gene that's responsible for transporting serotonin, a neurotransmitter involved in mood regulation and depression. (DNA methylation is a chemical process that affects whether or not a gene gets expressed in response to social and physical cues.)

Bullied twins had higher SERT DNA methylation at age 10 compared with their non-bullied twins, the study found. What's more, the children with higher SERT methylation levels had blunted cortisol responses to stress. These alterations could make bullying victims more vulnerable to mental health problems as they age, the researchers said.

"Many people think that our genes are immutable; however this study suggests that environment, even the social environment, can affect their functioning," Ouellet-Morin said. "This is particularly the case for victimization experiences in childhood, which change not only our stress response but also the functioning of genes involved in mood regulation."

The study was detailed online Dec. 10 in the journal Psychological Medicine.