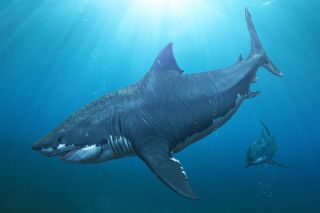 The largest known shark that ever lived, Carcharocles megalodon, ruled the seas for over 20 million years. The enormous toothy predator, which could grow to about 60 feet long, seemed indestructible. Even now, the shark's status is so legendary that — like a powerful celebrity — only one word is sufficient to name it: megalodon.

"Megalodon lived all around the world, during a time in which the oceans were warmer than today," biologist and marine species specialist Catalina Pimiento said. "Our research suggests it was a cosmopolitan giant shark that was able to live in different latitudes, as ocean temperature didn't determine its distribution. We also know it used shallow water productive areas as nurseries."

Life appeared to be pretty good for this dominant apex predator, until disaster struck. Pimiento and an international team of researchers determined that megalodon did not die out alone. When the gigantic shark went extinct around 2.6 million years ago, so too did a third of all other large marine species. The previously unknown "Pliocene marine megafauna extinction" is described in the journal Nature Ecology & Evolution.

RELATED: Megalodon Met Its Demise When Its Prey Went Extinct

Pimiento conducted the research at the Paleontological Institute and Museum of the University of Zurich with her colleagues John Griffin, Christopher Clements, Daniele Silvestro, Sara Varela, Mark Uhen, and Carlos Jaramillo. The team made their determinations after a meta-analysis that looked at numerous prior studies concerning the fossil record of sharks, marine mammals, sea birds, and sea turtles.

"The work of hundreds of paleontologists over many years allowed us to characterize this extinction," said Pimiento. "Most of these works have been catalogued in a public database: The Paleobiology Database."

The scientists found that, in addition to megalodon, species of big sea cows and baleen whales also went extinct 2-3 million years ago. As many as 43 percent of sea turtle species, 35 percent of seabirds and 9 percent of sharks also died out at this time.

The drivers of the die-out are not precisely known, but the researchers note that violent sea level fluctuations coincided with the extinction event. Coastal habitats were significantly reduced as a result. Marine mammals that megalodon feasted on started to decline, while new competitors evolved.

RELATED: The De-Extinction of Bygone Animals Sounds Like a Great Idea — But It Isn't

The researchers analyzed a phenomenon called functional diversity, which generally concerns the range of characteristics and behaviors that organisms exhibit in communities and ecosystems. During the newly identified extinction event, 17 percent of the total diversity of ecological functions in the marine ecosystem disappeared, and 21 percent changed.

Particularly impacted were warm-blooded animals, suggesting that large, homeothermic species could be more vulnerable to extinction when major changes occur in their environments.

"Today, larger marine animals are more susceptible because they are targeted by humans," Pimiento said.

RELATED: Humans Are Changing the Climate 170 Times Faster Than Normal

The outcome of the current human-driven mass extinction event is unknown for now, but all such events — at least based on past evidence — result in winners and losers. Megalodon was clearly in the latter group 2-3 million years ago. The winners, however, included the polar bear Ursus, the storm petrel Oceanodromaand the penguin Megadyptes. All evolved just after this time.

Much has changed since then, however, such that polar bears, some storm petrels and Megadyptes — a genus represented by a sole surviving species, the yellow-eyed penguin — are now threatened with extinction.