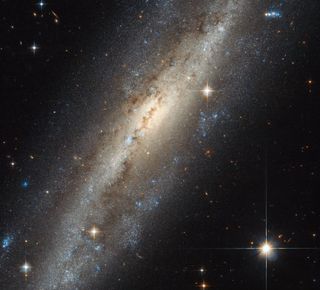 How best to strike up conversations with intelligent aliens? Mathematics might be the common lingo.
(Image: © ESA/Hubble & NASA)

Communication between Earthlings and intelligent aliens should be based on mathematics — exo-arithmetic greetings that form a shared lingo, some researchers say.

The idea is that mathematics is as much a part of our humanity as music and art. And it is mathematics that might be understandable — even familiar — to extraterrestrial civilizations, allowing us to strike up star-speak repartee.

Carl DeVito, an emeritus faculty in the mathematics department at the University of Arizona in Tucson, has proposed a language based on plausibly universal scientific concepts. He recently detailed his work at the Astrobiology Science Conference 2017, held from April 24 to April 28 in Mesa, Arizona. [13 Ways to Hunt Intelligent Alien Life]

Designing a signal that attracts attention and, on examination, is "clearly" the work of intelligence, is a complex problem, DeVito told Space.com. To explore the possibilities, he authored "Science, SETI, and Mathematics" (Berghahn Books, 2014).

DeVito spotlights the famous German mathematician Karl Gauss, who suggested in 1820 the planting of large swaths of Siberian forest in a graphical demonstration of the Pythagorean Theorem.

Some 20 years later, Austrian astronomer Joseph von Littrow was keen on touching off kerosene-filled trenches in the Sahara Desert that took on the form of various geometric shapes.

Both scientists thought that such large displays on Earth would surely grab the attention of faraway intelligent life. Doing so, they reasoned, would be communicating our planet's intellectual prowess. (Neither idea was carried out.)

"The concept of first attracting attention and then displaying meaning is, perhaps, the best way to solve the problem," DeVito said. "Maybe extraterrestrial intelligence will have similar ideas and thereby make themselves known to us."

DeVito suggests that, for two societies to be able to exchange precise, scientific information of mutual interest, they must first learn each other's units of measurement.

Together with linguist R. T. Oehrle, DeVito has developed a language for exactly that purpose, potentially enabling civilizations from different star systems to report to each other the masses of their planets, the chemical composition of their atmospheres or the energy output of their stars.

Regarding these suppositions — all known to humans by the 19th century — DeVito said we can communicate the gram, the calorie, the degree (Kelvin) and our units of pressure.

Is belief in God good for people?

Still, there are several potential difficulties that must be recognized.

For one, an alien race might start with a different geometry and derive its laws of motion in that geometry, DeVito said. Therefore, the results might be very different from the formulation of the laws that are familiar to us, he said.

"The mathematics of motion is differential calculus. Can we assume that an alien race shares this with us? Differential and integral calculus are so fundamental in so many areas of science that it is hard to imagine a science without them," DeVito said. "But this is, perhaps, a human bias."

DeVito said he wonders whether an alien society would have the equivalent of Euclidean geometry.

"We, of course, can't know, but we must be aware that the physics of an alien race, even in a fundamental area like mechanics, might differ in subtle but important ways from our own," he said.

Similarly, would an alien civilization, in its scientific development, come to model its solar system as humanity has, in the Copernican system?

Given that aliens understand physical reality, DeVito said we can begin constructing a language and communicate with E.T. whatever amount of mathematics is thought necessary.

"The problem — and it is a difficult one — is how to go from a discussion of mathematics to a discussion of other aspects of human civilization." It's very important, he said, that the cross-cultural researcher must play a key role in the search for extraterrestrial intelligence.

DeVito acknowledges that we Earthlings certainly want to present ourselves as a highly intelligent race. In putting our best face forward, we want to be seen as a life-form that has achieved much and learned much, he said, "but is wise enough to realize that it has much more to learn."

Leonard David is author of "Mars: Our Future on the Red Planet," published by National Geographic. The book is a companion to the National Geographic Channel series "Mars." A longtime writer for Space.com, David has been reporting on the space industry for more than five decades. Google+. Follow us @Spacedotcom, Facebook or Google+. This version of this story was posted on Space.com.