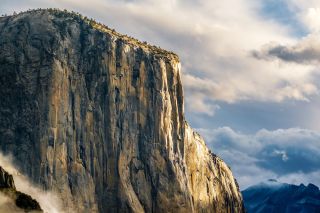 One of the best rock climbers in the world has just conquered one of Yosemite's most difficult rock faces — without any ropes or other safety gear. He is the first person to ascend to the top of this formation without using any safety gear.

Alex Honnold, a 31-year-old from Sacramento, California, climbed unassisted to the top of El Capitan, a sheer, granite monolith that towers nearly 3,000 feet (914 meters) above the valley floor in Yosemite National Park. He accomplished the staggering "free solo," meaning he did not rely on ropes or any other gear, in less than 4 hours on Saturday (June 3), sometimes nearly running up the vertical half mile, National Geographic reported.

This is not the first time Honnold has attempted a free solo of El Capitan; he made an earlier attempt in November but stopped after only 1 hour.

The route Honnold used, called the Freerider, is not the most difficult ascent in the park in terms of raw climbing prowess. Still, it is grueling and long, and uses nearly every type of climbing skill there is. The true challenge, however, was reining in the fear when looking down at the sheer drop to the valley floor below, and knowing that one false move could spell death.

Honnold, however, seems to have a preternatural calm and even spurred neuroscientists to put him in a magnetic resonance imaging, or MRI, machine in 2016 to see whether his brain's fear center, the amygdala, was firing properly. It turned out that his brain's machinery centers for both fear and reward were eerily quiet when viewing either distressing or exciting images, suggesting that he has managed to turn off both the motivational and fear centers of his brain when summiting a dangerous or tricky climb, Nautilus reported.