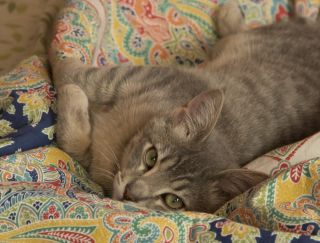 We all know that person. Her Instagram is covered with more pictures of feline friends than human companions. Not an insignificant number of these pictures feature mini cat-sized lattes with the caption "Fluffy simply adores her morning coffee." And let us not forget that the archetype of crazy cat man may be just as prevalent. When you look at these pictures, you probably wonder: is he like this because of the cat? Or does he have the cat because he is like this?

It turns out that cats have a mischievous and somewhat dark reputation in neuroscience. There is research to suggest that a cat's proximity to other mammals can cause them to behave strangely. This feline power has been attributed to a protozoan that lives in their stool, called Toxoplasma gondii (or Toxo for short). In one classic story, researchers showed that Toxo can travel into a rat's brain and cause the rat to no longer avoid areas where cats live. The rats, in fact, become attracted to the smell of cat urine. Previously repulsed by the smell, these brain-infected rodents run joyously through urine-laden environments. They walk right through the cat's trap, until their young rodent lives come to an end under a forceful paw.

These same protozoans can affect the brains of humans. Immuno-compromised patients, like those with AIDS, can contract the infection from a litter box and develop dangerous brain abscesses. We treat these patients with powerful antibiotics and frequently recommend that they give away their cats. Pregnant women are also advised not to handle cat litter, as a fetus does not yet have the immune system needed to fight Toxo. Fetuses exposed to the protozoan can suffer from seizures, cognitive problems, and blindness. But what about your immunocompetent and decidedly non-pregnant Instagram friend; is she under the influence of this cat's protozoan minion?

Neuroscientists have shown that Toxo may have more subtle effects than brain abscesses and blindness. The bug contains an enzyme that creates dopamine, a neurotransmitter. Humans given dopamine pills are at an increased risk of impulsive and risky behavior. Excess dopamine activity is also involved in schizophrenia. Immunologists point out that the known genetic risk factors for schizophrenia include many immune-related genesthat could affect the way one's body reacts to Toxo. Theoretically, a strange Toxo-induced immune response in the brain could cause psychosis. Even more alarming was a summary of thirty-eight studies, published in 2012, that found that individuals with schizophrenia were three times more likely than those without schizophrenia to have antibodies in their blood to the Toxoplasma protozoan, meaning their bodies developed an immune response to Toxo at some point. Measuring antibodies to Toxo, however, is several steps removed from cat ownership. The clues are intriguing, but are cats really to blame for psychotic behavior?

New research in the journal Psychological Medicine suggests that your cat friends are just fine. Scientists from University College in London examined 6,705 adolescents and 4,676 young adults to see if early exposure to household felines contributed to the risk of developing psychotic episodes. In the largest and best-controlled study to date, the researchers showed that those exposed to cats were at no increased risk of psychosis after controlling for a number of other variables (including ethnicity, social class, and dog ownership – to control for exposure to animal stool). As lead author Francesca Solmi put it, "previous studies reporting links between cat ownership and psychosis simply failed to adequately control for other possible explanations." Cat ownership doesn't seem to truly increase one's risk of psychosis.

So—is a cat sipping a latte on Instagram bizarre? Certainly. But it's not Fluffy's fault. He didn't ask for any of this (most cats are lactose intolerant), and it's time to clear his name.

Jack Turban is a research fellow at the Yale School of Medicine. His writing has appeared in The New York Times, The Journal of the American Academy of Child & Adolescent Psychiatry, and Kevin MD among others. Find him online at www.jackturban.com. He does not own a cat.