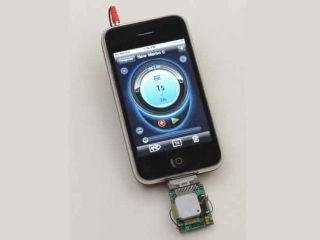 The chemical sensing prototype plugged into an iPhone 30-pin dock connector with the display-side up.
(Image: © Dominic Hart/NASA)

Smartphones already stream YouTube videos and surf Facebook, but they might also double as chemical sensors that can transmit alerts to first responders about the release of dangerous chemicals.

A NASA scientist has unveiled a postage-stamp-sized sensor that can plug into an iPhone and convert Apple's beloved product into a mobile chemical detector.

The tiny device can sniff out low amounts of ammonia, chlorine gas and methane, and send alerts to other phones or computers over regular phone networks or a Wi-Fi connection.

"Ours is the smallest in the world that can do complete sensing work," said Jing Li, a physical scientist at NASA's Ames Research Center in California. Her prior work gave the device a strong NASA pedigree that includes air quality sensors tested on the International Space Station.

Li and other researchers developed the proof of concept for the Department of Homeland Security's Cell-All program. Homeland Security hopes to eventually see such sensing chips embedded in everybody's cell phone, so that the mobile devices could form a huge chemical-alert network wherever people go.

Cutting a chip down to size

The new silicon-based sensing chip contains 64 nanosensors that combine compactness, low-cost, low-power and high-speed. But squeezing all the sensing components into that tiny package proved a challenge, despite Li's experience creating electronic noses for both a Silicon Valley startup and NASA.

"Previously we had a handheld device the size of a Coca-Cola can," Li told TopTenReviews. She needed to rethink the circuitry design of the sensing chip if she was going to make something the size of a postage stamp.

Li's group created a power-sipping sensing chip that consumed just 5 milliwatts, or 40 milliwatts when combined with a sampling jet to help pick up chemical traces. By comparison, an iPhone 3G charger might draw about 2 watts, or 2,000 milliwatts.

The research team estimated that an iPhone battery can last for more than 100 hours while running the sensing chip continuously, without the sampling jet. Having continuous use with the sampling jet cuts the battery endurance down to around 20 hours — but Li pointed out that the sensing chip would probably run with only a time interval, such as every 5 or 10 minutes for a 1 or 2 minute operation, based on the user's desire.

Hacking the iPhone for national security

Li and her colleagues originally chose to work with the iPhone late last year because it represented a relatively open resource for third-party developers. But Apple has since cracked down and put restrictions on any outside applications or add-ons, which meant that the researchers could not directly use the iPhone's bottom connector for communication with the sensing device.

They instead scrambled to come up with a workaround solution. Now the sensing chip only draws power from the bottom connector, and routes its data communication through an iPhone audio input jack. That required the researchers to convert the sensing chip's electronic signal from voltage to frequency, so that the iPhone's wave recorder could register the sensor data.

"In that sense, we don't jailbreak [the iPhone], and do everything legally," Li explained.

She hopes that either Homeland Security or NASA can talk with Apple about easing the iPhone restrictions. But she did not rule out the possibility of switching to another phone for Phase II of the program early next year, even though that would mean another electronic redesign of the connectors.

For now, Li's group plans create a slicker sensor that can display the data right on the iPhone, because a computer is currently required to do all the data decoding. The researchers want to not only identify chemicals by name, but also detect chemical concentration, humidity and temperature. They even plan on the data including pinpoint locations of the chemical events, courtesy of GPS on the iPhone.

Li also hopes to someday see prototypes in the hands of firefighters or other first responders, although Homeland Security has yet to decide on such testing. Regular consumers won't see the devices anytime soon as smartphone accessories, but the sensors could sneak into phones down the road — and they might just save some lives.