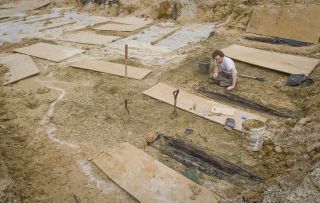 Forrest Follet from the Cobb Institute of Archaeology at Mississippi State University, removes the soil from the lid of one over 35 graves uncovered during construction in 2013.
(Image: © The University of Mississippi Medical Center)

An estimated 7,000 bodies are thought to be buried under The University of Mississippi Medical Center (UMMC), according to radar scans of the campus grounds.

Construction workers first discovered some of the unidentified human remains under the university in November 2012 while preparing to build a new road on the campus. University officials described the discovery of the 66 corpses in a statement published online in April 2013, noting that the workers had uncovered wooden coffins containing human remains dating to the 19th and 20th centuries. The remains were thought to be those of former patients at the Mississippi State Insane Hospital, an asylum for people with mental illnesses, which operated on that site from 1855 to 1935, according to the statement.

Then, in 2014, radar scans of land to the west of the UMMC School of Dentistry yielded another grim surprise: 2,000 more bodies, The Clarion-Ledger reported in March of that year. And more recent scans now place the current estimate of human bodies under UMMC at around 7,000 people, distributed across 20 acres of grounds, UMMC officials announced yesterday (May 9) in a statement. [See Photos of the Excavations that Uncovered 'Insane Hospital' Bodies]

Exhuming and reburying 7,000 bodies could be very expensive — about $3,000 per corpse, or a total of about $21 million — and UMMC is currently investigating options that could relocate the bodies and create both a memorial center and a dedicated lab for analyzing the remains, UMMC representatives added.

Records indicate that the State Insane Hospital housed as many as 35,000 patients between 1855 and 1935, and up to 9,000 of its residents died on the site during its 80-year history. Between 1855 and 1877 alone, 1,376 patients were admitted. One in five died, from ailments including "softening of the brain," "nervous exhaustion" and "chronic diarrhea," according to The Clarion-Ledger.

Studying the remains of people who lived and died long ago can provide pathologists with unique insights into human health and disease, Molly Zuckerman, assistant professor of anthropology and Middle Eastern culture at Mississippi State University, said in a statement.

In addition to analyzing the skeletons themselves, archaeologists will investigate the age and composition of the wood coffins, which could also hold clues about the bodies that were buried in them, UMMC officials said in the statement.

The coffins, all of which are pine boxes of the same design, are extremely narrow — likely because they were compressed over decades by the weight of the soil, according to UMMC representatives.

Archaeologists working with the 66 bodies recovered between 2012 and 2013 emphasized the importance of handling and analyzing these anonymous skeletons with dignity and care — courtesies that their owners might not have received in life, Zuckerman said in a statement published in April 2013.

"Asylums in [the] late 19th century or early 20th century probably weren't salubrious places to live, so it matters to us to be able to exhume these people in a very respectful and ethical manner," Zuckerman said.

The names and stories of these thousands of people, interred in unmarked graves, may never be revealed. But experts are already working to ensure that the patients will not be forgotten.

Faculty from UMMC and other institutions recently formed the Asylum Hill Research Consortium (AHRC) to help guide the respectful relocation of the bodies and the creation of a memorial that would be open to the public, according to an AHRC overview that Ralph Didlake, director of the Center for Bioethics and Medical Humanities at UMMC and a member of the consortium, shared with Live Science.

"If we exhume the remains and rebury them off site, what we would have at the end of that process is a cemetery," Didlake said in a statement. "But with the project we're proposing, we will have not only a respectful memorial for these individuals, but we will have an education platform and a research resource."

The AHRC also hopes to assist in assembling resources for analyzing the recovered bodies, and to provide educational resources that could help bring the long-buried history of the state asylum and its patients to light, according to the overview.