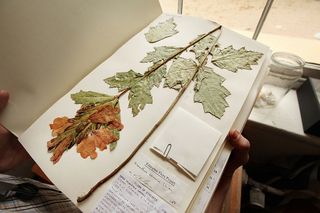 Sharing preserved plant specimens — like this Ethiopian endemic Acanthus plant from the Herbarium at The Royal Botanic Gardens, Kew in London (which was not involved in the recent events in Australia) — is an important part of international botanical research.
(Image: © Peter Macdiarmid/Getty Images)

Australian biosecurity officers have destroyed historic and irreplaceable plant specimens that date back to the mid-1800s due to a paperwork error, according to news reports.

A rare collection of flowering plants from France's National Museum of Natural History in Paris was incinerated in March due to an email mix-up and insufficient paperwork, reported the Australian Broadcasting Corporation (ABC). The pressed plant specimens were considered "irreplaceable" because of their high historic and scientific value, according to the ABC.

A spokesperson for the Australian Federal Department of Agriculture and Water Resources, which controls the country's biosecurity, told the ABC that the documents accompanying the collection from the museum did not comply with Australia's import conditions. Queensland's herbarium, which was set to receive the collection from Paris, was asked to provide further documentation, but an email mix-up delayed the response. When the additional paperwork was received, biosecurity officials requested more information. During the time that the paperwork was being sorted out, the collection was incinerated. [Amazing Images from Australia's 'Lost World']

"The department acknowledges the significant value as a botanical reference collection," a spokesperson told the ABC. "[It] concedes that destruction of the specimens should not have proceeded while communication between the department and the intended recipient was ongoing."

These rigorous biosecurity policies last made headlines in 2015, when actor Johnny Depp and then-wife Amber Heard illegally brought their two pet Yorkshire terriers into the country.

Australia has strict import policies because the country has many biosecurity concerns regarding foreign plants and animals. Because of the nation's geographical isolation, and because some of the country's native flora and fauna is found nowhere else in the world, the introduction of non-native species can disrupt the ecosystem's natural balance. Plants and animals that are brought into the country without appropriate documentation and approval are subject to quarantine, according to the Australian government. These specimens can then be exported or destroyed if they are deemed to be a threat to the nation's ecosystem(animals could be euthanized).

The incineration of the plant collection from France was not the only recent incidence in which research specimens were destroyed. Within weeks of the incineration of the French collection, lichen specimens from New Zealand's Allan Herbarium that were being sent to the Australian National Herbarium were destroyed by biosecurity officers, the ABC reported.

"We rely on sharing specimens from all over the world to be able to do our science. So [the destruction of these collections] may have a major impact on our ability to do our research," Michelle Waycott, chair of the Council of Heads of Australasian Herbaria, told the ABC. "The fact that it happened twice in the space of a couple of weeks and that they were two separate ports, two separate entry points, has us very concerned."

According to Waycott, the New Zealand herbaria has since banned sending specimens to Australia.