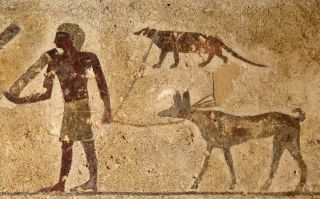 This ancient drawing on the wall of a tomb at Beni Hassan in Egypt shows a hunter holding the leashes of a dog (bottom) and an Egyptian mongoose (top).
(Image: © Copyright Linda Evans/Australian Center for Egyptology, Macquarie University, Sydney)

A mongoose on a leash, a colorful pelican and various bats are just a few of the rare animal drawings revealed in a new survey of a group of 4,000-year-old tombs in Egypt.

The tombs are located at the Beni Hassan cemetery and were excavated and detailed in a publication over a century ago by archaeologist Percy Newberry and his colleagues, wrote Linda Evans, a senior lecturer at Macquarie University in Australia, in an article published recently in the Journal of the American Research Center in Egypt.

The conservation and recording has "revealed many scenes not found in Newberry's reports," wrote Evans. In addition, the new work has identified creatures in the drawings that Newberry had been uncertain about. For instance, Newberry noted only the possible existence of a leashed Egyptian mongoose, a burrowing animal with a speckled gray coat, writing down the identification as a suggestion. Some Egyptologists who reviewed his reports thought the identification was incorrect, Evans noted.

"No other images of leashed mongooses are known in Egyptian art," Evans wrote.

Evans' team determined that the animal is "morphologically identical" to the Egyptian mongoose, wrote Evans, noting that the animal is also clearly depicted on a leash. "The animal clearly sports a gray collar that tapers to join a long, gray leash, which is held in the left hand of a bearer, who also holds the leash of a spotted hunting dog situated below the mongoose," Evans said.

The tomb belonged to Baqet I, a nomarch or provincial governor, who ruled during the 11th Dynasty. The researchers said they don't know why an ancient Egyptian artist drew a leashed mongoose on Baqet I's tomb.

"While mongooses have never been fully domesticated — that is, subjected to controlled breeding — some cultures have chosen to keep the animals as pets in order to control unwanted pests, such as snakes, rats and mice," Evans wrote.

The leashed mongoose shown on the tomb may have been used to scare birds so that they would fly out of the bush, making it easier for Egyptian hunters (who are depicted near the mongoose) to hunt them, according to Evans.

A wall on another tomb, this one belonging to another 11th Dynasty nomarch, Baqet II, is decorated with an image of a pelican, its colors still preserved despite the passage of 4,000 years. Newberry never saw or at least never recorded the pelican, Evans noted in the journal article. [In Photos: Ancient Egyptian Coffin with 'Odd' Art]

Pelicans "are rarely encountered in Egyptian art," though three species of pelican are known to pass over or winter in Egypt, Newberry wrote.

The image "shows awareness of subtle behavior details," Evans added, noting that the artist depicted the bird holding its feet at an "unusually abrupt angle," in what appears to be an attempt to show a movement that pelicans are known to make.

"When lifting off from the water, pelicans first hop across the surface for a number of meters, while simultaneously flapping their wings, thrusting their feet forward and back in unison in order to gain both lift and momentum," Evans wrote. The pelican drawn on the tomb appears to be in "midhop as it becomes airborne," she added.

The researchers are recording and analyzing additional creatures depicted at the site, Evans said. In one tomb, the team found batdrawings that Newberry was not aware of. "Representations of bats are extremely rare" in ancient Egyptian art, Evans told Live Science in an email. The team is analyzing the bat images, which will be described in a future journal article, Evans said.

The researchers said they aren't sure why so many animals, especially birds, are shown in the tombs at Beni Hassan. One painting, for instance, shows no fewer than 29 birds and three bats Evans said.

"The striking preponderance of birds at the site may indicate a special role for the animals in the lives of the local inhabitants, or perhaps the region once attracted an unusual variety of birds, possibly serving as a stopover for migratory species," Evans wrote in the journal article, adding in an email that the "climate was probably somewhat milder than modern-day Egypt — not as hot and dry."