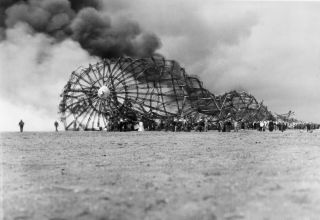 On May 6, 1937, the Hindenburg airship became engulfed in flames and crashed to the ground as it attempted to land at the Naval Air Station in Lakehurst, New Jersey.
(Image: © Hulton Archive/Getty)

When the massive Hindenburg airship made its debut, it was heralded as the future of luxury air travel, but after a trans-Atlantic flight on May 6, 1937, the German passenger airship was suddenly engulfed in flames and crashed as it attempted to land at the Naval Air Station in Lakehurst, New Jersey. The disaster killed 35 people and became a symbol of the end of the airship era.

Now, 80 year later, speculation still swirls about what happened on that fateful evening in May, so what is it that brought down the Hindenburg?

"From the safety perspective, there were always problems with airships," said airship historian Dan Grossman. "They are big, unwieldy and difficult to manage. They are very affected by the wind, and because they need to be light, they are also quite fragile. On top of that, most airships were inflated with hydrogen, which is a very dangerous and highly flammable substance." [In Photos: The History of the Hindenburg Disaster]

Investigations in the aftermath of the disaster, as well as later reconstructions, confirmed it was the hydrogen combined with inclement weather at Lakehurst that took the airship down.

"The Hindenburg disaster has a bit of an air of a mystery around it, but to be honest, I don't think there is a reason for that," Grossman told Live Science. "We know pretty much everything about it. We know that hydrogen was leaking and that it was ignited probably by an electrostatic discharge caused by the weather —there was a thunderstorm at the time of the landing."

According to Grossman, the only real mystery of the Hindenburg disaster is the cause of the leaky hydrogen. Speculations arose soon after the accident that the airship may have been taken down by a saboteur, an enemy of the rising Nazi Germany — after all, it was 1937, only two years before the beginning of World War II.

"It is much more attractive to think that someone tried to blow up a Nazi airship than to think about an electrical discharge from a storm," Grossman said.

The Zeppelin Co., which owned the Hindenburg, was the first to speculate that deliberate action may have brought down the passenger ship. The company had been received threatening letters in the past, but the firm later abandoned that hypothesis and endorsed the static-spark explanation.

However, conspiracy theories die hard, and the Hindenburg inferno kept stirring the public imagination. Several books have been published over the years looking for a human culprit behind the accident, one of which was turned into the plot for the 1975 film "The Hindenburg."

But the Hindenburg's fiery demise wasn't the first or only airship disaster. It wasn't even the deadliest one. In fact, although the blaze turned the 800-foot-long (245 meters) zeppelin into a pile of ashes and rubble in less than 1 minute, 61 of the 97 people on board survived the crash, albeit with injuries.

British R101, which held the title of the world's largest airship before the Hindenburg, was involved in a deadlier crash, when it slammed into a forest in northern France in 1930, killing 48 of 54 people aboard. (Interestingly, some sources claim the Germans used material salvaged from R101's wreckage to build the Hindenburg, according to the Bedford Borough Council.)

"At the time of the Hindenburg disaster, airships were already an outdated and obsolete technology about to be replaced with the much faster and more efficient airplanes," Grossman said.

Yet, there is one main reason the Hindenburg disaster left an indelible mark in aviation history, and why the accident became seared in people's minds: The airship's flame-filled end was captured on film.

"The real reason why we still talk about [the] Hindenburg is that it was caught on film and that in 1937 was something really remarkable. Today, people are used to seeing things on TV or on the internet, but in 1937, people were not used to seeing disasters with their own eyes," he added.

It was the Hindenburg's first arrival to the U.S. from Germany in its second season of flight. Curious locals as well as news crews and photographers gathered to witness the spectacle. Little did they know, the experience would be far more unforgettable than they expected.

The imagery of the "pride of the skies" turning into a ball of fire as it approached a mooring mast in stormy weather is now part of the cultural heritage, and so is the eyewitness radio report by journalist Herbert Morrison.

All this made the Hindenburg disaster much more prominent in the eyes of the public than other airship catastrophes that took place.

But according to Dan Grossman, airships weren't here to stay either way. Two years after the Hindenburg disaster, Pan American started operating the first trans-Atlantic passenger service using Boeing 314 airplanes, reducing the cost of air travel as well as journey times, and ushering in the true air transportation revolution.