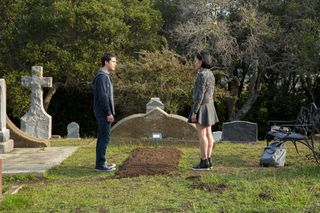 An image from the Netflix show, "13 Reasons Why."
(Image: © Beth Dubber/Netflix)

After watching the Netflix series "13 Reasons Why,"18-year-old Jaclyn Grimm was left with a feeling of unease. As the Orlando, Florida, high school student wrote in a column in USA Today, there was something dark, yet compelling about the basic plot line: The main character of the series, Hannah Baker, kills herself and leaves behind cassette tapes for the people she held responsible for her death.

"Hannah was bullied, assaulted and ignored while she was alive, but her death and the tapes she left behind changed that," Grimm wrote in her editorial.

Grimm, who has struggled with suicidal thoughts, told Live Science that watching a fictional show where the main character retains her voice after her death reminded her of how she used to imagine her own suicide would play out, with her friends and family "wishing they had reached out to me." [8 Tips for Parents of Teens with Depression]

For school counselors and mental health experts, responses like Grimm's raise profound concerns as the series' popularity grows among children, even those as young as 11 years old. Among other things, they are worried that the series, which is based ona young-adult novel of the same title by Jay Asher, glorifies suicide as a viable response to trauma.

Since the series debuted on the online channel on March 31, school counselors at middle schools and high schools across the country have sent emails and letters home to parents alerting them to the show.

"It became clear that the show had gone viral among adolescents and almost no adults knew what was going on," said Kathy Cowan, spokeswoman for the National Association of School Psychologists, which released guidelines for parents, students and school mental health professionals on how to talk to young people about the show. Cowan said it was the first time the association had issued guidance in response to a form of entertainment.

"Normally, we put out guidance around a terrorist attack or a high-profile school shooting," Cowan told Live Science. "So this was a first, but we recognized there are potential risks associated with watching the show."

Netflix responded to concerns Monday by saying that the company was adding warnings that will appear on screen at the start of the series. The streaming service had already placed warnings before episodes containing graphic subject matter, and the company said it was strengthening the "messaging and resource language" in the existing warnings.

Netflix currently hosts a page featuring resources for struggling young people at http://13reasonswhy.info/, and features a discussion segment on its site, called "13 Reasons Why: Beyond the Reasons." The segment, which was released just before the series launched, shows cast members, psychologists and the show's producers, including Selena Gomez, talking about issues depicted in the series, including bullying, sexual assault and suicide. [5 Misconceptions About Sexual Assault]

Despite those efforts, Cowan said she wishes the channel had "done things differently from the start."

One of the main concerns Cowan has about the series is the way in which it portrays adults as being both hapless — and, in some cases — callous toward struggling teens. The school counselor in the series is depicted as particularly inept and even "immoral," Cowan said.

"We want kids, when they have a problem, to reach out and seek help from an adult. This show does not reinforce that idea," Cowan said. [5 Myths About Suicide, Debunked]

There is also the issue of the series' graphic portrayal of rape and suicide. Not only are the scenes extremely difficult to watch, some experts fear the suicide scene is also so drawn-out and graphic that it could offer instruction and inspiration to young people considering suicide.

"Years of research has shown that the more detail that is presented in the way a suicide is portrayed, the greater the chance that someone consuming the media can identify with them — and that raises the risk of copycat behavior," said Dr. Victor Schwartz, a psychiatrist and chief medical officer at The Jed Foundation, a suicide prevention nonprofit, which issued its own guidelines for watching the series.

"There's obviously nothing more explicit than actually showing the process of somebody dying by suicide," Schwartz said.

For this reason, both Schwartz and Cowan discourage any child struggling with mental health issues from watching the series, because they fear it could serve as a trigger. Schwartz further advised that any child under the age of 14 should not watch the series. As for kids older than 14, Schwartz and Cowan said if a child is interested in seeing the series, parents should consider either watching it with them or at least watching it themselves and then talking to their children about issues brought up in the series.

"I would also discourage kids from binge watching the series, because I feel it can be overwhelming," Schwartz told Live Science. "Parents should be talking with their kids about what they're seeing and understanding. And if a child becomes distraught by the show and upset by it, they should stop watching it."

Talking about the show

For many parents, it may be too late to stop kids from watching the show. The series became popular among schoolchildren before many parents realized what their children were watching. And even though the series is rated TV-MA (mature audiences only), there's little to bar a middle schooler from simply clicking "play."

"The average 12-year-old can have access to streaming devices and [can have] access to pretty mature content. One thing the internet age is doing is blurring the lines between high school and middle schoolers' experiences," Cowan said. "They're not as distinct as they used to be."

For parents whose children have already watched the series, Cowan said the shows are at least serving as an opening to bring up tough subjects with their children.

"Maybe a year from now, we'll look back and say that Netflix succeeded in presenting topics that people had not felt comfortable talking about," Cowan said. "I hope that's the case, and I hope what we don't look back on and see is an increased rate of teen suicide or self-harm behaviors as a result."

Grimm, who said that all her friends have watched the series beginning to end, understands why the show became so popular so quickly among her peers. But as someone who has struggled with mental health and who knows how important it was that she recognized her condition and got help, she was alarmed that the show never even mentions mental illness, Grimm said.

"I think from an entertainment perspective, the show gets a lot right —it's dramatic and compelling," Grimm said. "But just because a show is entertaining doesn't mean it isn't dangerous."