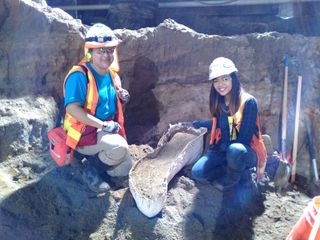 Jasmyn Nolasco (left) and Janis Basuga (right) put the leg bone of either a mammoth or mastodon (it's unclear which) into a protective plaster cast.
(Image: © Cogstone Resource Management Inc.)

The discovery of ice age mammal bones — one belonging to an extinct camel and the other to either a mastodon or a mammoth (it's hard to say which) — temporarily stopped construction of Los Angeles' subway line extension last month.

Paleontologists found the fossils just down the street from the La Brea Tar Pits in L.A.'s Miracle Mile district, where a future subway station will be built. On April 12, scientists discovered the camel bone, and on April 13, they uncovered the bone of the proboscidean (the ancient elephant relative).

"It's one thing to read in a history book that these animals used to live all over North America, but it makes it more real when they're found in your city," said Ashley Leger, the paleontological field director for Cogstone Resource Management Inc., a company that surveys sites for paleontological and archaeological remains before construction projects begin. "[For] the people of Los Angeles, this is their history. This is what lived there thousands of years before they were ever there." [Photos: Ice-Age Animal Skull Unearthed During LA Subway Construction]

The bone from the extinct camel (Camelops hesternus) is an exceptionally rare find, Leger said. The La Brea Tar Pits hold the preserved remains of more than 600 species of plants and animals, including the bones of thousands of saber-tooth cats and dire wolves. But researchers have found the remains of only about 40 camels in the tar pits, Leger said.

Camels originated in North America about 45 million years ago before spreading across the world. The last known Camelops died about 13,000 years ago, said Emily Lindsey, an assistant curator at the La Brea Tar Pits.

C. hesternus is related to, but a different from the modern dromedary camel, a one-humped ungulate more commonly known as the Arabian camel. C. hesternus hadlonger legs, knobbier knees and a larger head than dromedary camels do, according to The Source.

Two other camel genera lived in what is now California during the last ice age: Hemiauchenia and Palaeolama, Lindsey told Live Science.

The other fossil is an approximately 36-inch-long (91 centimeters) thighbone, or femur, of either a mastodon or mammoth. Both animals trampled through what is now Los Angles more than 10,000 years ago, before going extinct, Leger said.

She noted that the mammoth would have been a Columbian mammoth (Mammuthus columbi), not a woolly mammoth (Mammuthus primigenius), a shaggy beast that would have preferred the colder climate up north. Columbian mammoths were about the same size as their distant relatives, the modern-day African elephant, and about 15 percent larger than that species' close relative, the Asian elephant, Lindsey said.

Paleontologists will continue to look for more ancient bones as subway construction continues. All of the fossils uncovered during the Wilshire/La Brea station excavation will be donated to the Natural History Museum of Los Angeles County, according to The Source.

Leger noted that although the newfound bones aren't completely fossilized (that is, with minerals replacing original bone), they are referred to as fossils because they are 10,000 years old or older.

These aren't the first ice age animal fossils uncovered during the subway extension. In November of 2016, paleontologists found a tooth, tusks and a skull from either a mastodon or a mammoth, Live Science previously reported.