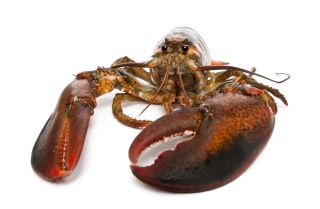 Between their hard shells and strong pincers, American lobsters are built to fight and keep other creatures away. But does this combative, standoffish nature extend to mating?

Clawed lobsters, including the American (Maine) and European lobsters, typically live in small, hierarchical groups, said biologist Jelle Atema, who studies American lobsters at Boston University and the Woods Hole Oceanographic Institution. Males vigorously fight each other to be the dominant male of the group, though it’s a short-lived title given that lobsters remember whom they've fought for no longer than a week.

For the most part, these contests establish which crustacean gets the best shelter — something also important for females. "Females fight just as much as males," Atema told Live Science. "We think they have a dominance hierarchy, as well."

Female lobsters will usually mate only after they molt, which typically occurs during the warm, summer months, particularly the middle of June. If a female were to mate with her hard shell on and then molt sometime afterward, she may lose stored sperm, which she keeps in a receptacle at the bottom of her thorax, or she could even lose fertilized eggs, which she holds underneath her tail.

How often a female will molt — and be receptive to mating — depends on her size, with the smallest of mature females molting every year and the largest every several years, Atema said.

As the female nears molting time, she will search for a suitable partner. While sitting in their rock shelters, males will use the swimmerets (appendages resembling small fins) under their abdomens to create powerful currents that shoot out into the environment. These currents are loaded with chemical cues that attract females looking to mate.

"It's sort of like a soap opera," Atema said.

Lobsters, by nature, are aggressive and territorial, but females have a crafty weapon up their shells: pheromones, which not only reduce male aggression but also reflexively close males' claws.

After wafting her pheromone-laced urine into the dominant male's shelter, the female will eventually work up the courage to enter his domain. In the male's shelter, the pair will playfully "box" or tap each other's claws, and then hang out peacefully until the female is ready to molt, possibly a few days later.

Mating among lobsters is a tender, human-like affair.

"When it's time to molt, the female does something very remarkable," Atema said. "She will go up to the male and place her claws on his so-called shoulders — next to the eyeballs on top of the carapace — and then take her claws back." This gentle act tells the male that she is ready to molt and mate.

The female will then lie on her side, shrink her soft body away from her exoskeletonshell, and then slip out of her shell, a process that takes about 15 minutes. Meanwhile, the male stands over her, touching her with his antennae and smelling her.

Once "undressed," the female will lie down right-side up with her abdomen and claws stretched out. The male will carefully begin to mount her and, using his walking legs and mouth parts, will turn the female over so that she is splayed out on her back. He'll then insert his first pair of spinnerets into the female's seminal receptacle cavity for a few second to pass his sperm to her.

After mating, the female will absorb water to grow in size and prepare for her new, larger shell to harden over. She'll spend the next week or so in the male's den while her shell hardens. Once armored, the female leaves the male's home, making way for another female to take her turn.

Many months later, the female will push thousands of eggs out of her ovaries and through the sperm receptacle, where they're fertilized. She'll carry these eggs, glued to the bottom of her tail, for the next 9 to 11 months.