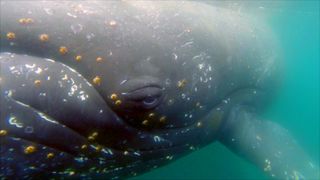 Whales' social lives have largely remained a mystery to scientists, until now.

Researchers have gained a whale's-eye view of the marine mammals' lives in Antarctica, thanks to a research project that placed noninvasive digital tags — containing sensors and a camera — on minke and humpback whales.

The data and footage collected reveal the animals' feeding habits and social behaviors, and show how whales use their blowholes to clear sea ice so they can breathe. [Whale Album: Giants of the Deep]

The research project, a collaboration between the World Wildlife Fund (WWF) and Oregon State University, used suction cups to attach cameras with sensors to the whales' backs. These camera tags would stay on each whale for 24 to 48 hours, allowing researchers to experience a day in the life of a whale.

"We have been able to show that whales spend a great deal of time during the days socializing and resting and then feeding largely throughout the evening and night time," lead scientist Ari Friedlaender, an ecologist at Oregon State University, said in a statement. "Every time we deploy a tag or collect a sample, we learn something new about whales in the Antarctic."

Different feeding behaviors have also been discovered because of the sensors. For instance, whales will range from rolling lunges near the surface to dives up to 1,148 feet (250 meters) deep to eat krill (small crustaceans), their main food source. Video of the whales diving for food also reveals the relative size of krill, and the density of the krill patch, that the whales are feeding on. This information can help with whale conservation efforts because beyond the impacts of climate change, an increase in krill fishing can also threaten the whales, said Chris Johnson, ocean science manager for WWF-Australia.

"Once we have an idea about where the whales feed, how often, where they go and rest, we can use this to inform policy and management to protect these whales and their ecosystem," Friedlaender said.

The researchers are still analyzing the data collected from their initial deployment of the sensors in March. The scientists said they plan to publish their findings eventually in a scientific journal.