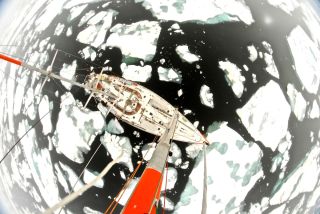 Add the remote North to the spots where the world's plastic trash ends up floating.

A multinational expedition that skimmed the Arctic Ocean in 2013 found plastic "was abundant and widespread" in waters east of Greenland in the Barents Sea, off northern Russia and Scandinavia. In some parts of those waters, they found hundreds of thousands of pieces of plastic per square kilometer of surface, the researchers reported this week.   "The growing level of human activity in an increasingly warm and ice-free Arctic, with wider open areas available for the spread of microplastics, suggests that high loads of marine plastic pollution may become prevalent in the Arctic in the future," the researchers warned.    The findings were published on April 19 in the journal Science Advances. The research team included scientists from Spain, Denmark, Britain, the United States, Japan, France, the Netherlands, and Saudi Arabia.

Nearly all the plastic was concentrated in the stretch between Greenland and the Russian islands of Novaya Zemla. Those waters "constitute a dead end" for the currents that flow northward from the Atlantic, bringing with them trash from the coasts of Europe and North America, the study found.   "The total load of floating plastic for the ice-free waters of the Arctic Ocean was estimated to range from around 100 to 1,200 tons, with 400 tons composed of an estimated 300 billion plastic items as a midrange estimate," the scientists wrote.

The concentrations found in the Arctic were much lower than those that collect in other ocean gyres, such as the notorious Pacific “garbage patch” northeast of Hawaii.

It’s believed to be less than 3 percent of the plastic now floating around the oceans today. But less than 40 percent of the ice-free Arctic was free of plastic debris, the study found — even though the region is far less populated than lower latitudes.   That can spell trouble for animal life in the far North, where sea birds like the northern fulmar are already turning up with higher-than-safe levels of plastic in their systems, the study noted. And with human-produce carbon emissions warming the Arctic twice as fast as the rest of the globe, the region is increasingly open to shipping, fishing and drilling.

Scientists estimate between 40,000 and 110,000 tons of plastics end up in the oceans every year. The new study suggests much of the debris found in the Arctic gets carried by the Atlantic thermohaline circulation, which funnels warm, salty surface water from the tropics northward. It sinks as it cools, leaving much of the plastic on the surface — but the researchers theorized that much of that trash ends up on the Arctic sea floor as well.