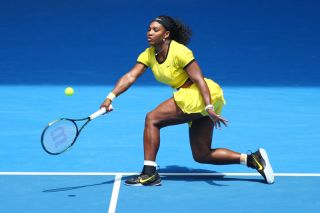 Serena Williams at the Australian Open in 2016.
(Image: © Leonard Zhukovsky/Shutterstock)

Tennis star Serena Williams hinted today that she may be pregnant, but is it safe for her to continue serving up hard hits on the court while she's expecting?

Earlier today (April 19), Williams, who is 35 and recently got engaged, posted a picture of herself to Snapchat with the caption "20 weeks," according to Sports Illustrated. However, Williams later deleted the post. If Williams' pregnancy began 20 weeks ago, this would mean that she was pregnant when she won the Australian Open in January.

Experts say that, in general, playing tennis is safe for pregnant women, at least in early pregnancy, although it could be risky in later pregnancy.

"Tennis is still a good sport for the average woman who's pregnant because it is a moderate cardiovascular form of activity," said Dr. Jonathan Schaffir, an obstetrician/gynecologist at The Ohio State University Wexner Medical Center, who is not involved in Williams' care. However, pregnant women should play at the level they are accustomed to playing, Schaffir said. This means that, because Williams is conditioned to play at a high level, she could continue to play at that level in early pregnancy, Schaffir said. But for the average woman, it wouldn't be advisable to play for as long or as intensity as Williams does, he noted.

Williams is "an elite athlete who is probably in peak physical form," Schaffir said. "The kind of tennis that [she] plays is a much higher intensity and duration" than what the average woman plays, he said. [11 Big Fat Pregnancy Myths]

Pregnant women should speak with their health care provider before starting any exercise regimen during pregnancy, Schaffir said.

In general, if a woman is otherwise healthy and isn't at high risk for certain complications during pregnancy, she can safely engage in most types of exercise, according to the American Congress of Obstetricians and Gynecologists (ACOG). In fact, regular exercise during pregnancy has a number of health benefits, including reducing back pain, decreasing the risk of gestational diabetes, strengthening the heart and blood vessels, and promoting healthy weight during pregnancy, ACOG said.

However, pregnant women are generally advised to avoid sports that put them at increased risk for falls, including downhill skiing, water skiing, surfing, off-road cycling, gymnastics and horseback riding, according to ACOG. Women are also advised to avoid sports that could put them at risk of getting hit in the belly, such as ice hockey, boxing, soccer and basketball.

Schaffir said he doesn't consider tennis to be a sport to avoid in early pregnancy, because there is a low risk of an impact to the body. However, later in pregnancy, a woman experiences changes to her body that could make playing tennis harder and more risky, and therefore not advisable, Schaffir said. [Blossoming Body: 8 Odd Changes That Happen During Pregnancy]

For example, pregnant women experience a shift in their center of gravity as their belly gets larger, which makes them more likely to lose their balance or fall, ACOG said. In addition, hormonal changes during pregnancy cause the joints to become more relaxed, which increases the risk for injury — particularly if a woman makes sudden, quick movements.

Schaffir said that, because of these changes, he did not think that Williams would be able to continue to play at her usual high level in the later stages of her pregnancy.

"There are concerns [about] playing activities that involve quick turns and sharp movements in the end of pregnancy," and so pregnant women may have to stop or modify their play in these cases, he said.

All women who exercise in pregnancy should make sure to stay properly hydrated, because pregnant women may get dehydrated more quickly, Schaffir said. Pregnant women should also listen to their body while exercising — if they feel lightheaded, dizzy, fatigued or short of breath, they should stop what they're doing and rest, he said.