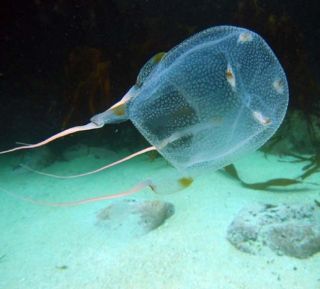 The craybdea branchi is a box jellyfish native to the South African coast.
(Image: © Brent Viljoen)

Box jellyfish are odd creatures. Some species have 24 eyes. They mate in mass spawning, during which males and females never touch while they release sperm and eggs into the ocean and let nature take its course.

Most interest to humans is the fact that box jellyfish can be deadly.

But because jellyfish don't make for good fossils, and few jellies exist in museum collections, little is known about their evolutionary history or the relationships between different species.

Now scientists have gained new information about the distribution, relationships and evolution of these deadly sea creatures, findings that could eventually help researchers generate antivenom to save lives.

Who's related to whom

Box jellies, also called sea wasps, stingers or fire jellies, live primarily in warm coastal waters around the world. They are particularly well known in Australia, the Philippines and the rest of southeast Asia, but they also occur in Hawaii and in waters off the United States Gulf and East Coasts.

Some are harmless, others cause death to humans in just minutes.

Named for their box or cube-shaped body, these animals are members of Cubozoa, the smallest class of Cnidaria, animals ranging from sea anemones and corals to Portuguese man of war and true jellyfish, all of which possess stinging capsules known as nematocysts.

Using DNA extracted from tissue samples, the researchers used a number of genetic tests and analytical techniques to trace the evolution of the various species and their toxicity and to sort out misidentified species. Among the findings: Box jellies may contain a unique family of proteins that, with further study, could help create antivenoms.

The Australian box jellyfish (Chironex fleckeri), the largest box jellyfish species, is considered the most venomous marine animal and its sting can be fatal. Its close relative, Chironex yamaguchii, has caused deaths in Japan and the Philippines. A much smaller species, Carukia barnesi, is the first species known to cause Irukandji Syndrome. Symptoms include severe low back pain, nausea, headache and vomiting, and sometimes “an impending feeling of doom”, but the syndrome is usually not life-threatening. Other box jellyfish species are now known to cause the same symptoms.

“Knowing who is related to whom among the box jellyfish will be very helpful in making predictions about species that are not well known,” said NOAA researcher Allen Collins. Its possible an antivenom that works for one species might work for another, he said.

Other species of jellyfish are known to swarm and takeover parts of the oceans. Box jellies don't seem to move around as much as some species, however.

The study revealed several patterns in the global distribution of box jellyfish species. Some live exclusively in the Atlantic, others in the Pacific, and still others are found in the Indian Ocean.

"Geography seems to isolate species and most don’t seem to cross open ocean habitats," the researchers said in a statement. "A few are found in all three oceans and may live in tropical regions around the globe."

The study, funded by the National Science Foundation and the PADI Foundation, is detailed in the Proceedings of the Royal Society.