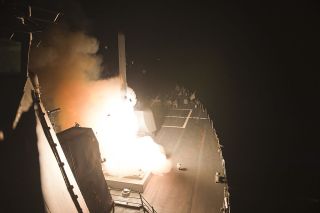 This week, the United States fired 59 Tomahawk missiles to destroy a Syrian airbase in retaliation against the Assad regime's alleged use of chemical weapons against its people, according to the Department of Defense.

The missiles, which were launched from ships in the Mediterranean Sea today local time (yesterday in the United States), were targeted at the al-Shayrat Air Base in Homs province, from which the Syrian military is suspected of deploying the planes that carried out the deadly nerve gas attacks this week. But how do these missiles work, and how were they able to precisely target this location without any pilot nearby? [Killer Chemistry: The Chemical Weapons of World War I]

Tomahawk cruise missiles were first used in Desert Storm in 1991 and have been a popular choice in a number of conflicts, most recently in strikes against Libya in 2011, said Thomas Karako, a senior fellow at the International Security Program, Missile Defense Project at the Center for Strategic and International Studies in Washington, D.C.

The main advantage of these missiles is their range; some classes of the weapon can travel up to 1,350 nautical miles (1,550 miles, or 2,500 kilometers), according to the U.S. Navy.

"It has fairly long legs. It doesn't have the speed of some other missiles, but it has a fairly long reach," Karako told Live Science. "Any time there's some defended airspace and the goal is not to put an aircraft pilot in harm's way, you want a longer-range capability."

In this instance, the range allowed the missiles to be fired from a ship in the Mediterranean, which is typical, given that they are carried by submarines or ships, Karako added.

These missiles can also be deployed very quickly, said Chris Harmer, a senior naval analyst with the Middle East Security Project at the Institute for the Study of War, a nonprofit organization that provides military research and analysis.

"You send an email to the ships saying, 'Send these targets,' you hit a button and it goes," Harmer told Live Science. "With manned aircraft, there's a much longer planning process."

To navigate, the missiles use a combination of digital scene matching and global positioning system (GPS) to pinpoint their targets with better accuracy. Digital scene matching takes images captured by the missile while in flight toward its target and matches them to images taken prior to the flight, during mission planning, according to a 1994 paper describing digital scene matching from the Johns Hopkins University Applied Physics Laboratory, which helped design the system. Another aspect of the system's navigation is a tool called terrain contour matching. This system compares images from a previously acquired contour map and compares them with measurements that a radar altimeter makes on board the missile. Based on input for the terrain-matching algorithm, the system can update its inertial navigation system — a set of sensors, such as accelerometers and gyroscopes to measure rotation — to reorient itself.

Tomahawk missiles can also make real-time updates to their position.

If something in the terrain changes or the mission gets canceled, the people monitoring the missile can redirect it with a simple command, Harmer said.

In the past, historical mapping might have been done by a plane on a reconnaissance mission a week earlier, and the military could only hope nothing had changed. Nowadays, because drones and satellite imagery are ubiquitous, "they're taking live updates until the missile hits the target," Harmer said.

The accurate navigation allows the missiles to fly low to the ground, meaning they can fly closer to other objects and often evade radar detection by foreign military. They are also capable of taking a nonlinear route to a target, which makes them well-suited for evading dangerous areas en route to a target, according to the U.S. Navy. Their ability to take a nonlinear route also means multiple missiles can be launched from different locations and all land at the target at the same time, Karako said.

The missiles can also be programmed to loiter in an area without dropping a bomb. In yesterday's attack, all 59 missiles reached the target within 1 second of one another, Harmer said.

Tomahawk missiles are about 18 feet (5.6 meters) long, and can carry up to a 1,000-lb. (450 kilograms) warhead or a group of 166 tiny "bomblets," which are essentially like grenades. Initially, the missile is propelled by its engine. Once it's in flight, its wings unfold, and it can fly at a top speed of 550 mph (880 km/h). The company Raytheon, which manufactures the Tomahawk missiles, is currently developing an updated version of the missile that could have two-way satellite communication with objects on the ground, such as tanks and ships, as well as more robust and sophisticated navigation systems.

In fiscal year 2016, the Navy purchased 214 of the missiles, each of which cost $1.09 million, said Capt. Mark Johnson, program manager for Tomahawk missiles. However, that cost includes past research and development; the "flyaway" cost of a new Tomahawk missile is around $650,000, Harmer said.