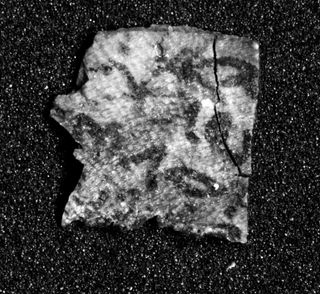 One of the 15 fragments that was recently sold and is now in an institution in the United States that hasn't made a public announcement.
(Image: © Photo courtesy Les Enluminures)

Twenty-eight fragments from the Dead Sea Scrolls that were purchased from the antiquities market have yet to be published, but are now sitting in three U.S. institutions, Live Science has found.

Scholars have questioned whether some of these fragments are modern-day forgeries or if they come from caves in the Judean desert that were looted in the past few decades.

Often, anonymous individuals sold these fragments that have appeared in the U.S., claiming that they were once owned by Khalil Iskander Shahin, an antiquities dealer in Bethlehem, in the West Bank, Live Science found. Shahin collected many of the Dead Sea Scrolls from the Bedouin people in the 1940s, '50s and '60s; he often went by the name Kando, which his son William Kando now uses. [In Photos: Dead Sea Scrolls from the Antiquities Market]

However, William Kando has raised concerns about the number of scroll pieces claimed to have shown up in the United States. In conversations with Live Science, he said that while his family has sold some scroll fragments to collectors in the United States over the past few decades, the family didn’t sell them in the numbers that some collectors are claiming.

During the conversations with Live Science, William Kando also revealed that, after the Kando family sold scroll fragments to U.S. collectors, these artifacts were often resold multiple times, creating a tangled collecting history that makes it difficult to determine which of the 45 fragments the Kandos actually owned.

The Dead Sea Scrolls come from 12 caves, which contained thousands of scroll fragments and are located near the site of Qumran in the West Bank. Excavations of the caves by professional archaeologists uncovered some of the scrolls, while private Bedouin residents removed other scrolls, before selling them to Shahin.

The scrolls contain text from books in the Hebrew Bible as well as community rules, calendars and astronomical texts, among other writings.

Eleven of these caves were discovered between 1947 and 1956, and the discovery of a 12th cave was announced earlier this year. Archaeologists found that most of the scrolls in the 12th cave had been plundered decades earlier. More caves that contain (or once contained) scrolls could await discovery, said Randall Price, a professor at Liberty University in Virginia, who was one of the leaders of the team that excavated the 12th cave.

Altogether, there are nine unpublished Dead Sea Scroll fragments at Southwestern Baptist Theological Seminary in Fort Worth, Texas; four at Azusa Pacific University in Azusa, California; and another 15 fragments that were recently sold through a company called Les Enluminures on behalf of an anonymous seller and are now in an undisclosed U.S. institution. Sandra Hindman, the president of Les Enluminures, said that the institution has not yet made a public announcement and she is not at liberty to disclose the identity. [See Photos of Dead Sea Scrolls Fragments]

As the 28 unpublished scroll fragments are studied and described in scientific journals, more information will appear on what the artifacts contain. Already, multiple scholars who are concerned about the fragments have called for the publication of as much information on their collecting history as possible.

"Southwestern purchased nine Dead Sea Scroll fragments approximately seven years ago. We currently have a contract to publish them with Brill ," a publisher of scholarly books, said Ryan Stokes, a professor of the Old Testament at Southwestern Baptist Theological Seminary. "Hopefully, the volume will be available in the next year."

When Southwestern purchased the fragments seven years ago, the seminary stated in its news releases that the fragments included writings from the biblical books of Exodus, Leviticus, Daniel, Psalms and Deuteronomy. According to these past statements, one of the fragments holds passages from Leviticus 18, a biblical passage that forbids incest and homosexuality.

The four unpublished fragments at Azusa Pacific University include writings from the biblical books of Daniel, Leviticus and Deuteronomy, and should be published soon.

"We're hoping in the very, very, near future, with more feedback, our publication will come to light," said Robert Duke, dean of the School of Theology at Azusa Pacific University. Before Azusa Pacific University purchased the scroll fragments, the university received assurances from William Kando that the Kando family had owned those fragments in the past, Duke said.

It's not certain when the 15 fragments sold through Les Enluminures will be studied and published. The institution in the United States that now owns those fragments has not made a public announcement about the acquisition, Hindman said.

Spokespersons for the Museum of the Bible, Azusa Pacific University, Southwestern Baptist Theological Seminary and Lanier Theological Library all told Live Science that their institutions had not bought the Les Enluminures fragments.

Les Enluminures sent a batch of black-and-white photographs of the fragments to Live Science. The images show what appears to be Greek text on some of the fragments, a language that has been seen on other Dead Sea Scrolls. Hindman said she believes all 15 fragments were once in the collection of Bruce Ferrini, a collector in Ohio who died in 2010.

Hindman said that her information indicates that the 15 fragments were originally sold by the Kando family in 2002 before being passed through a series of collectors. William Kando expressed concerns about this claim, saying that he sold seven fragments in that year to a man named Craig Lampe and that he thinks some of those fragments later went to a "library in California" (a description that better matches Azusa Pacific University).

Duke said that he's not certain if Azusa's Dead Sea Scroll fragments were among those sold by the Kando family to Lampe in 2002.

Some of the 15 fragments may be part of the same scroll, and it's possible that in 2002, the 15 fragments were part of a few larger fragments that have since fallen apart Hindman said. She said she is convinced that the fragments are authentic. Lampe's antiquities business is now run by his son Joel Lampe, who did not return requests for comment.

A number of Dead Sea Scroll fragments in America have already been published. These include 13 fragments that were published last year in the book "Dead Sea Scrolls Fragments in the Museum Collection" (Brill, 2016) and are now in the collection of the Museum of the Bible, which is set to open in November 2017 in Washington, D.C., just three blocks from the U.S. Capitol. [The Holy Land: 7 Amazing Archaeological Finds]

In the book, scholars noted a number of suspicious features that might indicate the fragments are forgeries. The 13 scrolls were purchased in four lots from anonymous sellers between 2009 and 2014, according to the book. William Kando told Live Science that while a few fragments may have come from his family's collection, not all of them are from the Kandos.

However, the case for forgery is not settled. Ada Yardeni, a professor at Hebrew University of Jerusalem, who is in an expert in the paleography of the Dead Sea Scrolls (the study of their handwriting), told Live Science that her analysis indicated that all 13 fragments are authentic.

Curators at the Museum of the Bible said that they are treating the scroll fragments at their institution as potential forgeries and are conducting scientific tests on them. The curators said they also plan to address the issue of authenticating Dead Sea Scroll fragments in the museum display.

Other Dead Sea Scroll fragments that have appeared in the past two decades in the United States have been described in scientific publications. These include: one fragment at Lanier Theological Library in Houston, one fragment at Ashland Theological Seminary in Ashland, Ohio; a fragment from a collector in Pasadena, California, that scholars from the Foundation on Judaism and Christian Origins studied and published; and one published fragment at Azusa Pacific University.

Additionally, previously published fragments arrived in the U.S. in the mid-20th century and are now at the Oriental Institute of the University of Chicago and the Syrian Orthodox Church's eastern U.S. archdiocese.