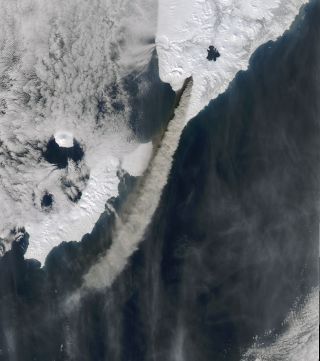 The last time Kambalny volcano erupted, the United States was not yet a country. But the Russian volcano awoke last week, after a nearly 250-year snooze, with a violent eruption.

Kambalny is the southernmost volcano on Russia's Kamchatka Peninsula, an area about the size of California that is home to more than 300 volcanoes. In fact, the peninsula hosts the world's highest concentration of active volcanoes, and so eruptions are common. But Kambalny surprised scientists when it shook awake on March 24 and began to erupt.

Since 1993, researchers with the Kamchatka Volcanic Eruption Response Team (KVERT) of the Russian Academy of Sciences have monitored volcanic activity in the area. [Images: Journey to Kamchatka's Volcanoes]

"Nothing pointed to a possible eruption of the Kambalny," Olga Girina, head of KVERT, told Russian news agency TASS, according to Russia Beyond the Headlines. "It is a pure surprise for us. We continue the monitoring and will analyze possible threats as data come in."

The thick, ash-laden plume that erupted from Kambalny could be seen from space. A day after the eruption began, NASA's Terra satellite captured an image of the volcano and its plume, which stretched about 60 miles (100 kilometers) southwest, according to NASA's Earth Observatory. Kamchatka Peninsula is largely covered in snow at this time of year, and the NASA image also includes the dark stain of ash covering the snow to the west. According to NASA researchers, by March 26, ash covered the ground all around the volcano.

Though the ash is visible, NASA researchers warned that volcanic eruptions also pose the invisible threat of sulfur dioxide, which can harm the human respiratory system. NASA's Aura satellite, which carries an ozone-monitoring instrument, detected an airborne plume of sulfur dioxide moving south.

"The higher SO2 amounts downwind could be due to multiple factors, including variable emissions at the volcano (such as an initial burst), increasing altitude of the plume downwind or decreasing ash content downwind," Simon Carn, an atmospheric scientist at Michigan Technological University, told the Earth Observatory.

A KVERT alert also noted that sporadic ash plumes reaching up to 26,200 feet (8 km) above sea level are expected and could affect aircraft flying in the region, according to NASA.