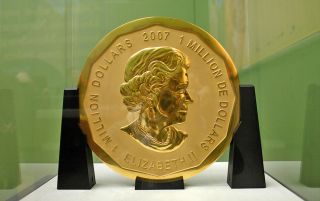 A massive gold coin worth millions of dollars was stolen early this morning from the Bode Museum in Berlin, Germany, according to news reports.

Robbers broke into the museum at around 3:30 a.m. local time today (March 27), likely entering through a window and fleeing with the valuable coin before police arrived on the scene, reported the Associated Press. A ladder was also discovered nearby, according to the AP.

The coin, dubbed the "Big Maple Leaf," was produced in 2007 in Canada, and was the first coin with a face value of 1 million Canadian dollars ($750,000), according to the Royal Canadian Mint. The hefty coin tips scales at 221 pounds (100 kilograms), and by weight alone, could be worth almost $4.5 million at market prices, reported the AP. [Lost Art: Photos of Paintings Stolen from the Gardner Museum]

Police spokesman Stefan Petersen said that more than one thief was likely involved with the heist, due to the coin's size and weight, but officials would not specify if they have any security footage of the robbery, according to the AP.

The huge coin measures almost 21 inches (53 centimeters) across and is 1.18 inches (3 cm) thick. In October 2007, the "Big Maple Leaf" earned the title of world's largest gold coin, designated by the Guinness World Records. The coin has been on display at Berlin's Bode Museum since December 2010, on loan from a private collection, reported the AP.

The coin, which features an engraving of maple leaves on one side and an effigy of Queen Elizabeth II on the other, was designed to promote the Royal Canadian Mint's line of "99999 pure gold bullion" coins (which refers to the coins' purity of 999.99/1000 gold). The "Big Maple Leaf" was created as a unique showpiece, but after a few buyers expressed interest, a very limited quantity of the coins were made available for sale, according to the Mint.