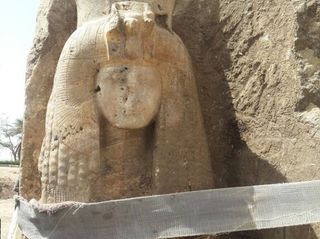 A statue that may depict Queen Tiye, the grandmother of King Tut, has been unearthed near Luxor.
(Image: © Egypt Ministry of Antiquities)

A "unique" carved alabaster statue that may represent King Tut's grandmother ― Queen Tiye ― has been unearthed on the west bank of Luxor along the Nile River, archaeologists with Egypt's Ministry of Antiquities announced yesterday (March 23).

The statue, which looks to be life-size in images released by the ministry, was found accidentally when workers lifted the lower part of the colossal statue of King Amenhotep III, the ninth ruler of ancient Egypt's 18th Dynasty, who lived from about 1390 to 1352 B.C. The statue, dating back around 3,400 years, was situated next to the king's right leg, according to the mission leader, Hourig Sourouzian.

Found within the mortuary temple of Amenhotep III at Kom Al-Hittan, the statue is "beautiful, distinguished and unique," Egyptian Minister of Antiquities Khaled El-Enany said in a statement. [In Photos: 3,300-Year-Old Egyptian Carving]

Previously discovered statues of the queen were carved into quartzite; this is the first alabaster statue of her found inside the temple, El-Enany said.

The statue is in good condition, with its ancient colors preserved, Sourouzian said. Next, fine restoration work on the statue will be carried out.

Another alabaster statue found at the site in 2011 shows Amenhotep III wearing a pleated kilt and a Nemes headdress, or the striped head cloth worn by pharaohs. That statue was part of a pair of colossi of the king found at his tomb. Each of these statues would have been as tall as a six-story building and weighed some 720 tons (650,000 kilograms). The colossi would have "stood guard at the temple's main gate," according to the World Monuments Fund (WMF).

Amenhotep III ruled ancient Egypt during a time of prosperity, during which he built grand structures, according to the WMF. For instance, his temple originally held three enormous mud-brick gates called pylons along a corridor that led to a courtyard and sanctuary, the WMF said. Hundreds of statues, sphinxes and steles (tombstone-like stone slabs that would have been inscribed with words related to Amenhotep III) were erected inside the temple. The entire complex was longer than five football fields, according to the WMF.

Over the years, the temple and its stone structures have been ravaged by water from the Nile, an earthquake in 27 B.C., and the pillaging of stones for use in other buildings, the WMF reported.