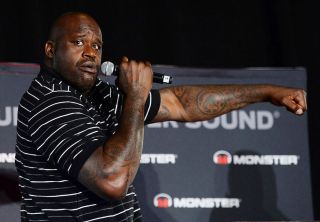 Former NBA player Shaquille O'Neal can likely see that a basketball is round, but the newly proclaimed "flat-Earther" can’t seem to say the same for the planet.

In a podcast that aired Feb. 27, the basketball legend announced that the Earth is flat, saying that when he drives from Florida to California, "it's flat to me."

But there are countless ways that show the Earth isn't flat, but round. (To be specific, it's an "irregularly shaped ellipsoid," according to the National Ocean Service.) [Earth from Above: 101 Stunning Images from Orbit]

Before we dive into the science, here is what O'Neal said, as sports reporter Ben Rohrbach first reported.

"It’s true. The Earth is flat. The Earth is flat. Yes, it is. Listen, there are three ways to manipulate the mind — what you read, what you see and what you hear. In school, first thing they teach us is, 'Oh, Columbus discovered America,' but when he got there, there were some fair-skinned people with the long hair smoking on the peace pipes. So, what does that tell you? Columbus didn’t discover America. So, listen, I drive from coast to coast, and this s*** is flat to me. I’m just saying. I drive from Florida to California all the time, and it's flat to me. I do not go up and down at a 360-degree angle, and all that stuff about gravity, have you looked outside Atlanta lately and seen all these buildings? You mean to tell me that China is under us? China is under us? It’s not. The world is flat."

1. It's true that Christopher Columbus didn't discover America; on his first voyage in 1492, he came across several islands in the Caribbean, including San Salvador, Cuba and Hispaniola (the current-day Haiti and Dominican Republic). However, native people already lived on these islands, so it's hard to say that Columbus discovered them.

Moreover, the Vikings landed in what is now Newfoundland, Canada, in about A.D. 1000, so Columbus wasn't even the first European to reach the New World.

But, the Earth's roundness is not dependent on how transparent elementary schools are about Columbus' journey. Sorry, Shaq, just because A is false, that doesn't mean B is too.

2. O'Neal mentions that the world looks flat to him during coast-to-coast drives. That's because the curvature of the Earth, which is just a few feet per mile, is hard to see from the ground, even when you're 7 feet 1 inches tall (215.9 centimeters).

3. Even the ancient Greeks realized that the Earth is round. Eratosthenes, a Greek mathematician, noted that a well had no shadow when the sun was directly overhead on the summer solstice. He determined that if the Earth is a sphere, he could calculate the planet's size by looking at the angle of the sun at another location, so long as the sun's rays were parallel. [Earth's 8 Biggest Mysteries]

In 240 B.C., Eratosthenes measured the distance between two Egyptian cities and calculated the angle of the sun at both locations. There was a slight difference between the angles, Eratosthenes found. He used the data to calculate the Earth's circumference to between about 25,000 miles and nearly 29,000 miles (40,000 to 46,600 kilometers), Live Science previously reported.

3. Ferdinand Magellan helped prove Earth's roundness when his fleet circumnavigated the world from 1519 to 1522. Unfortunately, Magellan was killed in the Philippines in 1521 when he was trying to convert the people there to Christianity.

4. O'Neal asserts that he did not "go up and down at a 360-degree angle" during his road trip. But a 360-degree angle is a full circle, so we're not quite clear what he means here. Traveling Earth's entire circumference would be a long road trip, but O'Neal would go in a full 360-degree loop were he to make it.

5. Technically, China is not "under" the United States — the Indian Ocean is, according to Mental Floss. You can see Earth's roundness in the famous "Blue Marble" portrait, courtesy of NASA.

In addition, gravity explains why Earth and the other planets are round. Mass attracts other mass, and the more matter a forming planet attracts, the stronger its gravitational pull toward the center becomes, Live Science reported. A sphere is the natural outcome of these forces.

On a side note, if you fell through the Earth it would take 48 minutes and 12 seconds to reach the other end, Live Science previously reported.