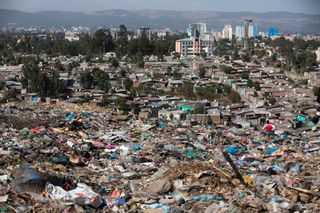 A photo taken on March 12, 2017, shows a view of Addis Ababa from the main landfill on the outskirts of the city, a day after a landslide at the dump left more than 100 people dead.
(Image: © Zacharias Abubeker/AFP/Getty)

The tragedy isn't the first of its kind, according to a piece on the disaster in the American Geophysical Union's Landslide Blog, but it is the deadliest such incident in years.

"Garbage landslides are particularly horrible events," Dave Petley, a blogger and geoscientist at the University of Sheffield in the United Kingdom, wrote in a 2008 post about the phenomena. "For most people, being buried alive raises an inbuilt fear, but the thought of being buried by garbage is particularly unpleasant. In addition, garbage often releases toxic gas, which means that victims may die from poisoning whilst awaiting rescue. Garbage also generates heat, which means that the victims may die from hyperthermia. In extreme cases, the garbage may ignite." [Managing the World's Waste (Infographic)]

Petley wrote the 2008 blog post in response to a garbage slide in Guatemala City, in which the deadly conditions were much like those in Addis Ababa: mountains of garbage piled with little regard for stability, picked over by armies of scavengers who make a living by pulling recyclables from the waste.

The Addis Ababa dump, called Koshe, may have been further destabilized by construction occurring on the site, according to Africa Review. Locals told the news organization that workers building a biogas plant had been packing down dirt with bulldozers, possibly precipitating the slide. An official investigation is underway.

Garbage-dump landslides are a significant problem for countries in the developing world, Petley wrote, but they are also a topic that scientists have not studied widely. One 2011 slide in the Philippines buried 20 houses when rains from Typhoon Nanmadol caused the collapse of a retaining wall. Another garbage landslide in the Philippines in 2000, the Payatas landslide, claimed the lives of at least 200 people and buried a shantytown at the site in up to 33 feet (10 meters) of trash. Gases from the decomposing garbage sparked several fires, hindering rescue efforts, according to an analysis of the disaster.

Whereas unstable, overly steep slopes are a risk factor for landslides of both land and garbage, trash slides pose a unique danger because of flammable methane and other decomposition gases, researchers have found. One 2005 garbage slide in Java, Indonesia, killed 143 people and illustrates such dangers. According to a study of that disaster, the garbage pile had a front slope approaching 100 percent — it was basically vertical. Along with heavy rains, methane explosions within the pile helped destabilize it. Plastic bags within the garbage pile gave the mountain of trash a low friction coefficient, meaning that the material within the landslide was particularly slippery. All of this instability combined with a vulnerable population of trash-pickers living at the foot of the precarious trash pile led to the staggering loss of life, the study found.

Huge garbage slides that kill many people get most of the attention, Petley wrote in 2008, but it's also quite likely that smaller, less-deadly slides are common and go unreported.