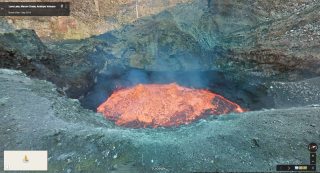 Google Street View can now take you into an active volcano off the coast of Australia to explore one of the world's largest lava lakes.
(Image: © Google)

Travel and safety are no longer factors if you want to explore one of the largest boiling lava lakes in the world. Google Street View can now take you into an active volcano off the coast of Australia.

There are nine active volcanoes in Vanuatu, an archipelago of 80 islands more than 1,000 miles (1,609 kilometers) east of Australia. To further expand its global mapping, Google sent two explorers into a crater above the boiling lava lake in Marum, an active volcano on the Vanuatuan island of Ambrym. According to Google officials, the explorers rappelled about 1,312 feet (400 meters) into the Marum crater to collect 360-degree imagery using the company's latest image-gathering device, called Street View Trekker.

Now available on Google Map's Street View, users can explore the molten lava lake, which Google officials said is about the size of two football fields. Explorer Chris Horsley, a travel photographer, said he hopes that people exploring Marum will realize how beautiful the world is. [The 11 Biggest Volcanic Eruptions in History]

"You only realize how insignificant humans are when you're standing next to a giant lake of fiery boiling rock," fellow explorerGeoff Mackley, a filmmaker, said in a Google blog post about the project.

The island of Ambrym is home to more than 7,000 people, along with its two active volcanoes — Marum and Benbow, which occupy the same massive caldera (a volcanic crater). Despite the volcanoes' unpredictable eruptions, the local population has "learned to live in harmony" with their volcanic neighbors, Google officials said.

Chief Mael Moses, head of the local village of Endu, said the Ambrym people believe the volcanoes are husband and wife devils, whose arguments cause the volcanic activity.

"If you go up to a volcano, you have to be very careful because the two volcanoes could get angry at any time" Moses said. "Sometimes when they don't agree there's an eruption, which means the spirit is angry, so we sacrifice a pig or [fowl] to the volcano."

Beyond the addition of Marum crater, Google Street View includes a walk-through of the Endu village. Devastated by the tropical cyclone Pam in 2015, the village is now ready to welcome travelers. Chief Moses said that by making Endu and the nation of Vanuatu more accessible, beginning with Google Maps, people can learn about their cultural traditions and help them to establish a sustainable economy.