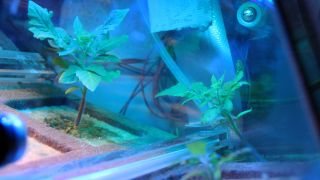 The German Space Agency is researching how to grow food using recycled urine and sweat for future missions to Mars or the Moon.
(Image: © DLR)

If you want to be one of the first human beings to visit Mars, you better have a strong stomach. Scientists in Germany are testing ways in which urine and sweat could help astronauts grow food on the Red Planet.

Most food for missions to the International Space Station are brought as cargo from Earth. However, longer-duration space missions, such as those to Mars, will need a self-sustaining food supply, scientists have said. Jens Hauslage, a plant physiologist at the German Aerospace Center (DLR), is researching how to grow food in space, including a test system that involves a tank of urine and a tomato plant, the BBCreported.

"The Earth is a closed biological system with plants producing oxygen and food; then you have the animals and the microbes to produce all the degradation processes in the soil," Hauslage told the BBC. "Without these systems, no sustainable long-term life-support system will be viable." [Sending Humans to Mars: 8 Steps to Red Planet Colonization]

Using both synthetic and human urine, Hauslage is conducting lab experiments to re-create this cycle in a way that could be useful for space fliers, the BBC reported. For example, the scientists filled columns of urine with pumice stones, the hole-covered stones that form when lava mixes with water. Within the pumice stones' holes are colonies of bacteria that feed on the urine, converting the ammonia in the urine into nitrites and nitrate salts (a fertilizer).

Most water on the International Space Station — including that from urine, sweat and wastewater from washing — is recycled aboard the orbiting lab. Hauslage's research at the DLR is investigating other applications for this water, which is already efficiently captured and recycled, for growing food in space.

The lab research will launch into space later this year on DLR's Eu:CROPIS (short for Euglena and Combined Regenerative Organic-food Production in Space) mission, a satellite containing two miniature greenhouses, Space.comreported. The satellite will simulate lunar gravity for the first six months, to test the potential of growing vegetables on the moon, and then will simulate Martian gravity.

While the satellite orbits, 16 cameras will document the onboard tomato seeds that will germinate and grow automatically under. Just as in the lab experiments, the satellite growing environment will use bacteria to feed on synthetic urine, producing fertilizer for the tomatoes as they grow, the BBC reported.

"Ultimately, we are simulating and testing greenhouses that could be assembled inside a lunar or Martian habitat to provide the crew with a local source of fresh food," Hauslage said in a statement about the mission last year.