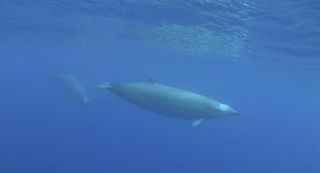 Scientists have captured the first-ever video of the True's beaked whale swimming underwater. Here, a still image from that video shows a group of subadult whales.
(Image: © Roland Edler)

For the first time ever, scientists have captured video of one of the ocean's most mysterious creatures swimming underwater.

The video reveals the True's beaked whale, a deep-diving cetacean whose sightings are so rare that many researchers who study the creatures go their whole lives without spotting one.

The video, along with new information on the beaked whale's physical color and distribution in the world's oceans, was published today (March 7) in the journal PeerJ.

"Ziphiids dive to depth for long periods of time, with only short breathing intervals at the sea surface," the researchers wrote in the article.

Some of these dives can reach depths of about 10,000 feet (3,000 meters) and last 2 hours, according to the statement. Unlike some of the more camera-friendly cetaceans, True's beaked whales stick to small groups, don't perform the flips and twists typical of dolphins, and don't seem to pursue boats as some other cetaceans do. What's more, these whales have some features that can make it tricky to distinguish them from other beaked whales. Combined, these features make it very difficult for scientists to learn more about the mysterious creatures, the researchers wrote in the study.

To do so, the researchers pooled their resources. By combining data from whale-watching expeditions, educational organizations and scientists, the team determined that the Azores (in Portugal) and the Canary Islands (in Spain) may actually be common spots for these whales to congregate. That may be because around these strings of islands, the ocean depth drops off steeply, creating the deep waters ideal for the True's beaked whale relatively near the shoreline. Past research found True's beaked whales in the North Atlantic Ocean and the Southern Hemisphere, but nowhere in between, so the new study extends the southern limit of the animals in the North Atlantic.

In addition to determining the hotspot for the beaked whales and capturing the underwater video of the elusive animals, the new study identified unique color patterns on the True's beaked whale's body that could help distinguish it from other species.

The new findings could aid conservation efforts by making it easier to identify whales that have been part of mass strandings or that have beached themselves with plastic in their stomachs, according to the statement.