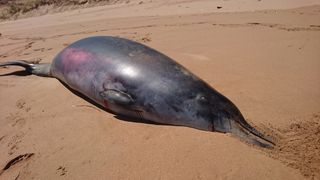 A dead whale that washed up on a southern Australia beach has something peculiar in its mouth: a sharp and pointy fang, say the researchers who examined it.

The whale, identified as a Hector's beaked whale (Mesoplodon hectori), was found south of Adelaide on Waitpinga beach in February. For the past 25 years, the South Australian Museum has done necropsies (an animal autopsy) on "as many [stranded] whales as it can from its shores," but the museum's researchers didn't expect to find anything unusual when they examined this particular whale — a female juvenile, said Catherine Kemper, a senior research scientist in mammals at the South Australian Museum.

Instead, the researchers found an "intriguing" fang, which has never been seen before in a Hector's beaked whale, Kemper told Live Science in an email. [Whale Album: Giants of the Deep]

It's possible that the tooth is vestigial — that is, much like a human's appendix or wisdom teeth, it was useful in an ancestor, but isn't useful anymore, she said. Or, maybe it's an evolutionary throwback, also known as an atavism, meaning it was present in ancestors, but still pops up from time to time, much like a human baby born with a tail, reported the Australian Broadcasting Corporation (ABC).

"All whales are derived from animals that had more teeth," Kemper said. "What's happened with time is [that] some of them have evolved. They have lost teeth because they have specialized their feeding to not need them."

However, it's difficult to say exactly what is going on, largely because scientists know little about beaked whales, said Nicholas Pyenson, a curator of fossil marine mammals at the Smithsonian's National Museum of Natural History, who has not seen the new specimen.

Case in point — this is only the third Hector's whale the museum has collected, Kemper told ABC.

"Beaked whales, they're among the most mysterious groups of whales," Pyenson told Live Science. Some beaked whale species are only known to science because their skulls have washed ashore, he said.

"They're hard to see in the wild, they live off shore, Pyenson said. "They dive very deep into the ocean and don't surface too much."

Yet, beaked whales are some of the most species-rich groups of whales, Pyenson said. And although scientists don't know much about them, they're famous for their weird teeth, he said.

For instance, the male strap-toothed whale (Mesoplodon layardii) has teeth that curve up and over its snout, preventing it from opening its mouth more than a few inches, Pyenson said. Other whales have extremely long teeth that might be used for male-male sparring, "which we infer happens deep underwater because you find scars all along the bodies of males that wash up," he said. [In Photos: Tracking Humpback Whales in the South Pacific Ocean]

Without more specimens, it's hard to say whether this whale's pointy fang is a common variation, an evolutionary throwback or something else, Pyenson said.

"It's definitely weird, but I wouldn't necessarily say it's a throwback, because these [whales] already have teeth, [this one] just seems to have had an extra, strange tooth," he said.