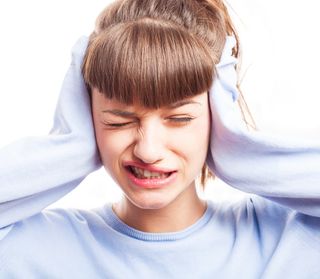 What songs usually get stuck in your head?
(Image: © Asier Romero/Shutterstock)

There are some songs that just beg to become embedded in your brain. "It's a Small World." "My Sharona." "YMCA."

Even a die-hard Village People fan is bound to get a little annoyed the 70-millionth time "It's fun to stay at the Y, M, C, A!" screeches through their skull. But why are sticky songs — earworms, as they're known — so hard to dislodge? And what kinds of songs are likely to get stuck in our brains, anyway?

A few disparate studies hold at least some answers. First of all, common earworms seem to share some features, researchers have found. They're songs you've heard a lot (which may be why current radio hits tend to dominate "Top 10 Earworm" lists). They often have repetitive notes or unexpected intervals in timing. They also have distinctive rhythms and pitch patterns. [What Type of Music Do Pets Like?]

"The overall conclusion is that the song has to be quite simple in order to be recalled spontaneously, but also have something a bit unique that makes the brain want to rehearse it over and over," said Kelly Jakubowski, a postdoctoral researcher in the Department of Music at Durham University in the U.K.

Scientists sometimes refer to earworms as "involuntary musical imagery," or INMI. A 2012 study published in the journal Psychology of Music found that about 90 percent of Finnish internet users reported getting a song stuck in their head at least once a week. The more musical the person, the more earworms they were likely to experience, that study found, and that result has been backed up by other surveys. One 2006 paper in the Journal of Consciousness Studies detailed the experience of a pianist and a composer who had almost constant INMI — 24/7 earworms, or perpetual music tracks (PMTs).

"I find almost nothing pleasurable about having a PMT [perpetual music track]," the pianist wrote. "Rather, it is quite a distraction most of the time, the kind of thing I wish I could turn off."

The pianist's distaste for earworms extended even to songs that he found most emotive, he wrote — mainly because the most affecting music was also a distraction from real life. People often think that annoying songs are the ones most likely to get stuck in people's heads, Jakubowski told Live Science, but survey results suggest that only about a third of earworms are unpleasant. However, those times when "The Lion Sleeps Tonight" ends up on mental repeat may simply be more memorable than the times when a favorite song becomes an earworm.

"It tends to be a bit of a bias that we have toward remembering those negative experiences," Jakubowski said.

Like it or not, the brain gloms on to recent and frequently heard songs. A 2013 study in the journal Psychology of Music, for example, found that the more familiar the song, the more likely it was to become an earworm. Participants didn't have to think too hard about the music to get it stuck in their heads, as anyone who has started humming along to a grocery-store soundtrack can probably attest: The researchers found that asking study participants questions about the songs, to make them process the music more deeply, did not affect the chance that the music would go full-earworm on them. [Why Do Certain Songs Bring Pleasure?]

Research presented at the 12th International Conference on Music Perception and Cognition in 2012 in Thessaloniki, Greece, found that longer notes with smaller intervals of pitch between them made for stickier earworms, perhaps because long notes and limited changes in pitch are simply easier to sing (think "It's a Small World" versus an operatic aria).

Jakubowski's research — published in November 2016 in the journal Psychology of Aesthetics, Creativity and the Arts — did not find the same relationship between long notes, small intervals and earworms, but it did suggest that the easier a song was to sing, the more likely it was to get stuck in people's heads. That research, based on surveys conducted between 2010 and 2013, compared earworms to similarly popular songs that were never cited as earworms. The study found that Lady Gaga was quite the earworm generator, with "Bad Romance," "Alejandro" and "Poker Face" all making the Top 10 list of songs that frequently got stuck in people's heads.

"Having listened to quite a lot of [the songs] when I was doing this study, I did end up with quite a lot of them stuck in my head," Jakubowski said. "Bad Romance" was one of the worst offenders, she added.

These sticky songs had faster tempos than non-earworm songs, Jakubowski and her colleagues found. Earworms were also likely to share pitch patterns that are common in Western music, particularly opening riffs that start out rising and then fall in pitch. Examples include "Twinkle, Twinkle, Little Star" and Maroon 5's earworm "Moves Like Jagger."

"Earworm songs are making use of these really quite simple overall melodic patterns," Jakubowski said.

But a dash of surprise seemed to help a song become sticky, too. Within these common structures, the researchers found that earworms tended to have unusual melodic features, like more leaps between pitches than typically expected in a pop song, or larger leaps in pitch. Earworms like The Knack's "My Sharona" and the Beastie Boys' "Intergalactic" are examples of songs with those unusual features, the researchers wrote.

Can't get you out of my head

So why does the brain do this to us? There may be some individual differences in earworm susceptibility, as is suggested by the consistent finding that musicians have songs stuck in their heads more frequently than nonmusicians. The 2012 research presented in Greece found that people with subclinical obsessive-compulsive traits (meaning they do not have the disorder but do have a tendency toward prevarication and worry) reported earworms more frequently than people who were less obsessive-compulsive.

People are more likely to pick up an earworm when they are doing something routine, like jogging or chores, according to 2010 research.

It's not totally clear what's going on in the brain during earworm episodes, but a 2005 paper published in the journal Nature found that the auditory cortex — the part of the temporal lobe that processes sound — was involuntarily activated when participants listened to familiar songs in which a section was muted. In other words, the brain was compelled to "fill in the blank" in the missing music. The researchers could even tell the difference between the auditory cortex filling in lyrics, in which case specific auditory association areas that are key to interpreting sounds became active, or imagining instrumentals, in which case more primary, basic sound-processing areas were at play.

Because earworms are involuntary, it's tricky to get rid of them on purpose. For the 2010 earworm study published in the British Journal of Psychology, the researchers asked a dozen people to record their earworm episodes in a diary and found that the more people tried to consciously get rid of an earworm, the longer the song remained stuck in their head. The process of thinking about an earworm to attempt to banish it likely just keeps the tune fresh in the brain, the researchers wrote. However, they added that it might also be that the stickiest, most annoying songs are the ones that people attempt to get rid of, and that those songs are somehow less amenable to banishment than the ones that people happily go on humming.