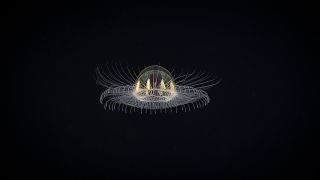 A bizarre, UFO-looking jellyfish was spotted floating in the ocean depths near American Samoa on Feb. 21, 2017.
(Image: © NOAA)

An ethereal, 'cosmic' jellyfish was spotted in some of the deepest reaches of the ocean, hovering near a previously unexplored seamount.

The luminous sea creature, which may be a completely new species, was spotted by a remotely operated underwater vehicle (ROV) roughly 9,800 feet (3,000 meters) below sea level in a remote region of the Pacific Ocean near American Samoa. The creature was discovered at the previously unexplored seamount, called Utu Seamount, by the members of the National Oceanic and Atmospheric Administration's (NOAA) 2017 American Samoa Expedition.

After the dive, Allen Collins, an invertebrate zoologist with NOAA's National Systematics Lab, initially identified the creature as Benthocodon hyalinus. Still, there's a possibility that the jellyfish could be a species previously unknown to science, Collins said. [See Images of the Otherworldly Alien Jellyfish]

"It is potentially new. There really is no way to be definitive about it, though, because specimens would need to be observed under a microscope and using genetics," Collins told Live Science in an email.

The logic behind classing this creature as a separate species is that, while B. hyalinus typically has gonads — or sexual organs — distributed along all eight canals, this little creature has gonads extending along only the outer half of these canals, Collins added.

What is known is that the otherworldly creature is a member of the hydromedusa family. Hydromedusae are known for having canals running vertically along the interior of the bell, as well as for the gonads that are attached to these canals, and they often have two sets of tentacles, said Michael Ford, a conservation biologist with NOAA's Northwest Fisheries Science Center.

"What is excellent about this observation is the perfectly relaxed arrangement of the two sets of tentacles — we think in position to allow optimum feeding in this midwater environment at approximately [9,800 feet] 3,000 meters," Ford told Live Science in an email.

The deep-sea dweller was spotted during the Okeanos ship's 2017 American Samoa Expedition, which aims to catalog the mysterious sea life lurking at incredible ocean depths in a relatively unexplored region of the Pacific Ocean.

"Through excellent video observations with ROVs, we can learn much about the animals in the midwater and what they are up to when we can catch them in an undisturbed state. As we collect more observations like this one, we can begin to get a clearer picture of life in the midwater — perhaps the largest biome on the planet," Ford said.

This isn't the first time that members of an Okeanos expedition have discovered otherworldly creatures deep in the ocean. In April 2016, the NOAA team spotted a glowing, tentacled disco-ball-like jellyfish floating near the Mariana Trench, the deepest spot in the ocean.