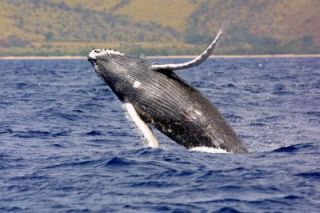 First drones, and now satellites are allowing scientists to spy on whales — for research, that is.

Though they are massive animals, whale populations are difficult to monitor, according to researchers. Drones have been used to capture footage of whales, and now scientists are turning to even higher-flying help. Researchers in Australia are using satellite imagery to track local humpback whale populations, reported the Australian Broadcasting Corp. (ABC).

Humpback whales were considered an endangered species under the Endangered Species Act of 1973. However, the U.S. National Marine Fisheries Service lifted the whales' endangered status last year as a result of successful conservation efforts. But despite this success, the migratory whales are difficult to track, and many population estimates are largely speculative, according to Curt Jenner, managing director of the Centre for Whale Research in Western Australia. [In Photos: Tracking Humpback Whales in the South Pacific Ocean]

"People say, 'The whale numbers are very healthy, aren't they?' Well, we can't actually honestly say yes to that, we don't know because we haven't had a monitoring program for this largest humpback population on the planet for about 10 years," Jenner told ABC News of humpbacks in Western Australia. "So we're very interested to find out if this very large number of whales can be sustained and whether it is healthy enough to continue on into the future."

Jenner and his colleague, Michele Thums, an ecologist with the Australian Institute of Marine Science, have investigated new ways to count humpback whales. The researchers said they will use two satellite images, taken from 373 miles (600 kilometers) above Earth, to conduct an accurate head count of humpback whales as they migrate up the Western Australian coast.

"Previously, it was done by traditional methods with people on aeroplanes or boats counting whales," Thums told ABC News. "But we're trialling a new method, which is to see if we can count them from space, and specifically from satellites that are in space."

Thums said the satellite imagery's high resolution allows for whales to be spotted with "quite a bit of certainty." However, it is a time-consuming process as they scan images manually. The researchers say they eventually want to develop a computerized scanning system to identify whales in the satellite images.