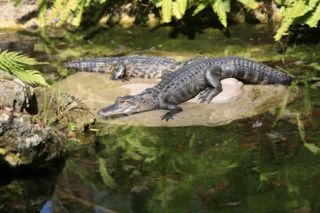 A study reveals that up to 70 percent of female alligators returned to the same mate for several years.
(Image: © Stockxpert)

Alligators are not as promiscuous as previously thought, a new study finds.

A 10-year study of alligators at the Rockefeller Wildlife Refuge in Louisiana revealed that up to 70 percent of females chose to remain with their partner, often for many years.

Scientists were surprised to find that that many alligators chose the same partner over many mating seasons, given the fact that the reptiles live in dense populations and females typically encounter many males as they move freely among the group.

Among many species in the animal kingdom, including bonobos (which are primates like us) and walruses, promiscuity is rampant.

"Given how incredibly open and dense the alligator population is at RWR (Rockefeller Wildlife Refuge) we didn't expect to find fidelity," said Stacey Lance, a researcher at Savannah River Ecology Laboratory who led the study. "To actually find that 70 percent of our re-trapped females showed mate fidelity was really incredible. I don't think any of us expected that the same pair of alligators that bred together in 1997 would still be breeding together in 2005 and may still be producing nests together to this day."

The finding, which serves as the first evidence for mate fidelity in any crocodilian species, was made by tracking a group of females and analyzing the DNA of their offspring. Out of 10 females, seven were found to have returned to the same mating partner, with one female mating with the same partner in 1997, 2002, and 2005.

Such a mating pattern is also similar to the mating behavior of bird species. Crocodilians species are the sole surviving reptilian archosaurs, a group of ancient reptiles that includes dinosaurs and gave rise to birds. The alligator’s evolutionary relationship to birds offers scientists a unique opportunity to better understand the ancestral mating systems of both birds and many dinosaurs.

"In this study, by combining molecular techniques with field studies we were able to figure something out about a species that we never would have known otherwise," Lance said. "Hopefully future studies will also lead to some unexpected and equally fascinating results.”

The study is detailed in the current issue of Molecular Ecology.