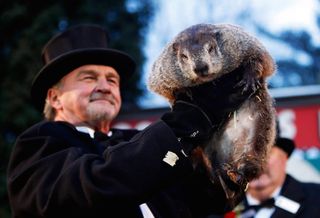 The furry Punxsutawney Phil has crawled out of his burrow on Gobbler's Knob and made his annual decree: There will be six more weeks of winter this year.

It seems the pudgy mammal — Phil weighs in at about 20 pounds (9 kilograms) — saw his shadow. Groundhog club officials in Punxsutawney, Pennsylvania, made the announcement early this morning, reading Phil's decree. "I clearly see a perfectly clear shadow of me; six more weeks of winter it shall be," Phil apparently declared.

However, it's unclear whether Phil's predictions will become a reality. Groundhogs (also known as marmots, woodchucks or whistle-pigs) have been predicting spring's timing since 1887, but their accuracy leaves something to be desired; the rodents are correct just 39 percent of the time, Live Science previously reported. [The Surprising Origins of 9 Common Superstitions]

Luckily, the groundhog isn't the only entity involved with weather predictions. Once a month, the U.S. Climate Prediction Center (CPC) makes a three-month weather outlook for the United States. According to its most recent report, released on Jan. 19, the country will have a mix of hot and cold temperatures in February, March and April.

Weather is predicted to be colder than usual in the states bordering Canada in the west and central parts of the country, including Washington, Idaho, Montana, North Dakota and Illinois. In contrast, the Eastern seaboard and South, as well as northwest Alaska, are expected to be warmer than usual, the CPC said.

Thus, Punxsutawney Phil's predictions may come true, at least for people in the cold parts of the country. Meanwhile, Staten Island Chuck, a groundhog that lives in the Staten Island Zoo in New York, predicted an early spring.

While using groundhogs as weather predictors may sound odd, keep in mind that the tradition began in medieval Europe, and was carried over to the United States by German immigrants in the 1880s, Live Science previously reported. The day also has some significance — Feb. 2 is the midpoint between the winter solstice and the spring equinox, marking the halfway point between the two seasons.

To get in on the action, watch a live stream of the festivities in Punxsutawney this morning, or join a live stream at Slooh, an online observatory, during which scientists will discuss weather prediction.