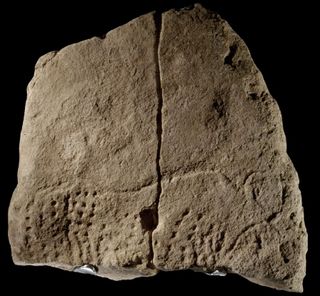 In the summer of 2012, a group of archaeologists turned over a broken block of limestone on the floor of a rock shelter in southwestern France and discovered what could be one of the oldest examples of art in Europe.

Scrawled with the image of an aurochs (an extinct species of cattle) and dozens of small dots, the slab was created by the Aurignacians, the first Homo sapiens to arrive in Europe. Radiocarbon tests showed that the engraving dates back to about 38,000 years ago, according to a Jan. 24 report in the journal Quaternary International.

New York University anthropologist Randall White, a co-author of the study who led recent excavations at the rock shelter, said that the discovery "sheds new light on regional patterning of art and ornamentation across Europe" at a time when humans were just starting to spread across the continent. [Gallery: Photos of Europe's Oldest Rock Art]

The slab comes from a partially collapsed rock shelter called Abri Blanchard, where groups of hunter-gatherers would have congregated during the winter.

This 65-foot-long (20 meters) shelter is located near the small town of Sergeac in France's Vézère Valley, a region famous for having some of Europe's oldest examples of cave art. Several other carved slabs were already discovered at Abri Blanchard a century ago, during excavations by amateur archaeologists Louis Didon and Marcel Castanet from 1910 to 1912.

Many of the early artistic representations from this region have been interpreted as vulvas, ever since a French abbot was presented with an image of a heart-like engraving from Abri Blanchard and declared in 1911 that it was a "pudendum muliebre" ("a woman's thing to be ashamed of"). But the artists at Abri Blanchard didn't just have an interest in the female form. They chose a diverse array of artistic subjects, from horses and cats to geometric designs such as rings, according to White and his colleagues.

Didon's team had nearly emptied the rock shelter in the early 20th century. So when White's team returned to the site in 2011, they dug underneath the previous excavators' old dirt piles into heavily concreted, untouched prehistoric sediments. In addition to the aurochs carving, the researchers found hundreds of stone tools and stone tool fragments, as well as animal bones, mostly from reindeer. They also found decorative bone, including an ivory bead and a pierced fox tooth.

White and his colleagues speculate that the carved block was a freestanding slab when it was decorated, meaning that either an Aurignacian found it and brought it into the rock shelter for engraving or the block had fallen from the ceiling and was engraved later on.

Aurignacian images of aurochs have been found at other sites, such as Chauvet Cave, also in France. Aligned dots have also been seen before on Aurignacian objects such as mammoth-tooth plaques and ivory pendants, but the combination of this design with an animal figure is "exceptional," the researchers wrote.

The discovery of the slab fits into the patterns researchers usually see in the earliest European art: There are broad shared features, with some regional quirks that stand out, White said in a statement.