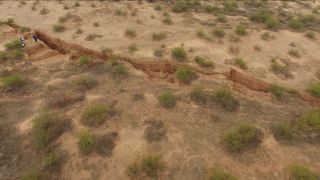 Drone footage revealed the extent of the earth fissure that opened up in the desert in Arizona.
(Image: © Arizona Geological Survey)

A gaping, 2-mile-long crack has opened in the barren earth in Arizona, and it will likely continue to grow, geologists say.

Recent footage from a flyover by an Arizona Geological Survey drone revealed the extent of the huge fissure in Pinal County, between Casa Grande and Tucson, showing the enormous gash splitting the barren land. The crack is so big that it dwarfs people walking along its edges in the video.

The northern part of the fissure, which is older and partially filled in, is shallow, while the southern portion is tens of feet deep in some spots, according to Joseph Cook, a geologist with the Arizona Geological Survey (AZGS). [Check Out Insane Photos of Sinkholes]

"Some areas are about 10 feet [3 meters] across and up to 25-30 feet [7.5 to 9 m] deep (tapering crack, narrowing with depth), while others are a narrow surface crack less than an inch across," Cook told Live Science in an email. "These narrow sections sometimes have open voids underground, so collapse of the overlying material is possible — this is how the deep open portions of the fissure formed."

After mapping the fissure using GPS, Cook said, they got another look using a drone.

Water withdrawal, primarily for agriculture, is the culprit, Cook said. As groundwater is pulled up, it leaves a void and the land above it subsides, leading to cracks. Arizona is full of these cracks, Cook said. "We see earth fissures forming around the margins of these subsidence areas and along mountain fronts within the subsidence areas," Cook said.

Cook and others with the AZGS have set up 26 study areas where they've mapped a total of 170 miles (275 km) of these earth fissures.

Not only does Cook expect the crack to lengthen, but the opening beneath the surface is likely bigger than what can be seen.

"I am sure the length of this fissure will increase over time, we are only seeing the surface crack of what collapsed, the underlying fissure is longer," Cook said.

"The crack is worrisome, but it's out in the middle of the desert with nothing nearby," Cook said. His main concern is that someone riding an off-road vehicle could stop by the crack, get off the vehicle to explore it, fall in and get stuck or buried.