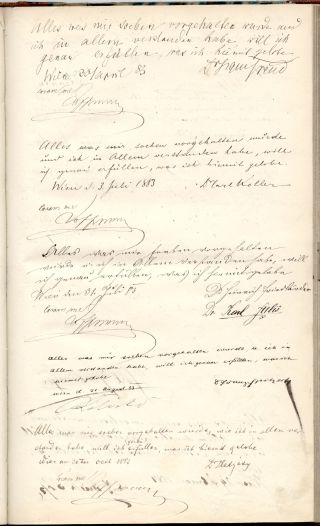 Sigmund Freud's work in psychoanalysis was prolific, and now you can own a piece of his career — for a price.

Freud's handwritten physician's oath from 1883 is up for auction today (Jan. 26), with bids starting at $195,000, according to Nate D. Sanders Auctions, the Los Angeles-based firm handling the sale. Also up for auction is a letter from later in Freud's career, regarding his research on dreams. Both documents offer some insight into Freud's storied career.

When Freud began working at Vienna General Hospital in 1882, he was required to sign a physician's oath. In the oath, Freud vowed to fulfill his medical duties "honorably, compliantly and diligently" and "to keep a scrupulously honorable moral conduct," according to Nate D. Sanders Auctions. The oath, which appeared in a hospital booklet, was signed by Freud in Vienna on April 30, 1883. [Top 10 Mysteries of the Mind]

During his time at Vienna General Hospital from 1882 to 1886, Freud worked in several departments, most notably Theodor Meynert's psychiatric ward. While at the hospital, Freud researched cerebral anatomy, including conducting studies on the effects of cocaine that led to his 1884 paper on medical application of the drug.

The letter on dreams, which Freud wrote on his personal stationary on May 28, 1935, will open with a starting bid of $95,000. The letter is written in German and was translated by the auction house. It appears to answer questions from the addressee about his 1899 book "The Interpretation of Dreams." In the letter, Freud discusses the real duration of dreams, which he said was "at present unsettled."

"Sigmund Freud is known as [a] pioneer in dream research," auction owner Nate Sanders said in a statement. "This letter is an important reflection of Freud's work and will be of tremendous interest to a collector."