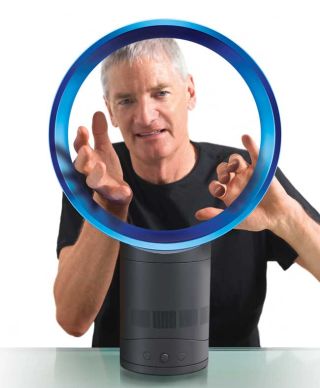 James Dyson with the new Air Multiplier fan, which instead of blades uses forced air around its ring, and the shape of an airplane wing, to create a rapid and smooth flow of air.
(Image: © Dyson)

Few inventions have lent themselves to as little improvement over the years as the simple fan, with its whirring blades that blow air across a desk or through a room.

But now even the conventional fan has been transformed.

James Dyson, the British inventor behind the vacuums that bear his name, has come up with an incredibly simple-looking, circular fan that has no blades. It uses "Air Multiplier" technology to push 119 gallons of smooth air out every second.

The conventional fan relying on blades has been largely unchanged for about two centuries; the first mechanical fans are said to have been built in the Middle East in the early 19th century. Ceiling fans blew onto the scene in the 1860s, powered by running water and a setup that turned a series of belts with the ability to operate several fans at once (some of these still exist in old buildings). A personal electric fan hit the market in the 1880s.

But the traditional design is not perfect, Dyson figured. Fan blades chop the air, creating an uneven airflow with buffeting bursts and moments of weaker flow.

Here's how the new setup works:

Air is pulled into the machine's cylindrical base with an impeller that draws from jet-engine technology. The air rushes up into a hollow ring. The air is then forced out of a 1.3-millimeter-wide slit (less than 1/16th of an inch) that runs all around the ring.

Here's the tricky part, developed during four years of testing:

As the air exits through the slit in the ring, it flows over the inner edge of the ring, which was modeled after an airplane wing. Imagine an airplane wing bent around into a loop. The air encounters what would be the leading edge of the wing, said Dyson engineer Andy Samways. When it hits the wing-like structure, the air speeds up, creating an area of low pressure.

"Air or any fluid will tend to hug a smooth surface," Samways explained in a telephone interview. "Air over a wing follows the profile, and that creates lift."

As the air exits the loop, the lower pressure pulls air from behind the fan along with it, and air around the front of the fan also gets pulled into the stream. That's simple physics. But it was the wing-like ramp that served as a breakthrough.

"We realized that this inducement, or amplification, effect could be further enhanced by passing airflow over a ramp,” said James Dyson. “This was the point where the idea of a bladeless fan became a real possibility. Here was a way to create turbulent-free air and finally do away with blades.”

Getting rid of blades has visible benefits: The new fan needs no safety grill, and what few parts there are can be easily cleaned. It runs on a small motor, and airflow can be fully regulated with a dimmer switch.